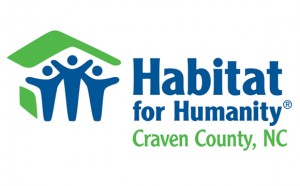 During the month of March and the first week of April, students from four different colleges and one high school will help Habitat for Humanity of Craven County build two homes during their spring break as part of Habitat’s Annual Collegiate Challenge program.  Over four weeks, approximately 98 students are expected to be in New Bern as volunteers to work on homes #65 and #66 on West Street.

“We are always delighted and energized to have these young men and women work with us on a Habitat home and it is interesting to see how much they can get accomplished over the four week period,” said Deedra Durocher, Habitat Craven’s Volunteer Coordinator.  The students have an opportunity to meet and work with the homeowners who have been selected for these homes since each homeowner must commit to a minimum of 300 ‘sweat equity’ hours in the building of their own home.

Overnight accommodations are being provided by area churches and meals are generally hosted by individuals, churches, or civic organizations. “I have been so impressed with the gracious hospitality that has been extended over the years to our visiting students by this community,” said Durocher. “We still have some openings for meals or hosted events we’d like to schedule for each of the groups, so hopefully those pieces will fall into place over the next week or so,” she said.

With the exception of one group, all our visiting students will be in New Bern for the first time. On March 4, Georgian Court University from New Jersey will bring 20 students and will be hosted by the First Baptist Church. Also that week, the University of Florida will arrive with 8 students hosted by Two Rivers Baptist Church. The University of Scranton, PA is sending 25 students the second week and they will stay with New Song UMC in James City. The last week of March, Centenary UMC will host 15 students from the University of Delaware who are coming for their sixth year of volunteering in New Bern.  The final group of 30 high school students and adults will arrive the first week of April from St. Mary’s Catholic High School in Michigan and will be hosted by St. Paul’s Catholic Church.

Habitat for Humanity organizations across the US has invited over 7,500 college and high school groups in over 182 communities as part of the 2018 Habitat Collegiate Challenge.  This program is one of several established by Habitat for Humanity International to engage the next generation of leaders in Habitat’s mission to eradicate substandard and poverty housing.  “The Collegiate Challenge exposes students from across the country with a common goal of helping people build a better life for themselves and their families,” explained Durocher. “Every individual involved in building this home is also building a foundation for a family to have a brighter future. We’re grateful to the commitment of these young men and women who are choosing to spend their spring break volunteering with Habitat Craven County,” she said.

Habitat for Humanity of Craven County was established in 1989 as an affiliate of Habitat for Humanity International, a non-profit Christian housing ministry. Over the last 29 years, the local organization has built 62 homes in partnership with homeowners who are deemed eligible by the Selection Committee, impacting 98 adults and over 110 children. Four additional homes, including the two to be built by the visiting school volunteers, will be completed during 2018. When each home is completed, the homeowner is responsible to pay a no-interest mortgage and other expenses associated with owning their own home. To date, the mortgages on 13 homes have been fully paid off.  Habitat does not give away houses but does make it possible for deserving families to realize their dream of homeownership.

For additional information about Habitat Craven County, or to offer New Bern hospitality to any of the visiting college groups, contact the Deedra Durocher, Volunteer Coordinator at 252-633-9599.

Submitted by: Deedra Durocher, Habitat for Humanity of Craven County