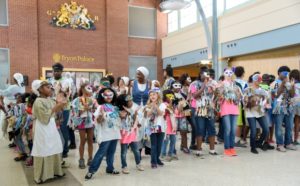 Tryon Palace’s Jonkonnu interpretive performance group will hold free workshops for all ages interested in joining the troupe throughout the summer. Workshops will be held in the Waystation Auditorium on Tuesdays, from 1 – 3 p.m., June 20 to Aug. 8.

A celebratory fusion of music and dancing, the 19th-century African American tradition of Jonkonnu is performed throughout the year as one of Tryon Palace’s special programs. Performances are held during the Candlelight Celebration in December and other special events throughout the year.

The workshops include men, women and children learning the history behind Jonkonnu, and how to dance and drum to traditional Jonkonnu songs.

Jonkonnu is an African American holiday celebration that’s roots can be traced back to Jamaica and the slave ships from West Africa. Historical records mention celebrations of Jonkonnu taking place near Edenton, N.C., as early as 1824. Except for a single 19th-century historical reference to a Jonkonnu celebration in Suffolk, Va., historians have been unable to uncover any evidence that it was ever part of the culture in North America outside of North Carolina.

Thanks to generous grant from the Tryon Palace Foundation, each workshop is free and open to the public.

For more information call 252-639-3500 or visit TryonPalace.org
Upcoming events at Tryon Palace include:

June 20: Behind the Scenes: Museum Technology

June 27: Behind the Scenes: Costume Shop