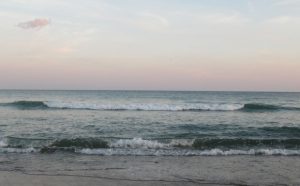 Most of us have been to the beach when there’s rip current warnings, but we still see children and adults in the water. Not only are they putting their own lives in danger, but they also put the lives of lifeguards and good Samaritans in danger.

In May 2007, I saw this first hand while serving as the Decedent Affairs Officer at Naval Hospital Cherry Point. I received the call when Master Sergeant Micheal Wert, USMC, died while trying to save two boys struggling in the surf at Fort Macon State Park. MSGT Wert was an Intelligence Chief assigned to the 2nd MAW at MCAS Cherry Point. MSGT Wert rushed into the water to save the boys and his teenage daughter, Katrina, joined in the rescue with a boogie board in tow. Her father put the boys on the board and told Katrina to take them ashore. As Katrina looked back, her father was no longer visible. The strong undertow had taken him underwater. A Rescue Team recovered MSGT Wert, but they were unable to revive him.

The Summer has just begun and two good Samaritans have already lost their lives saving others caught in rip currents.

I’m writing this in hopes that it will be a reminder to parents and those who go swimming during high threats of rip currents. Please heed to the warnings.

Please visit the National Weather Service NOAA’s website to learn about Rip Current Safety here: RipCurrents.NOAA.gov/index.shtml. We hope that you and your family have fun and stay safe at the beach!