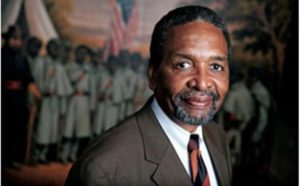 Tryon Palace’s Lunch and Learn lecture on Friday, May 19, will feature historian Dr. Frank Smith, Ph.D., discussing the legacy of the United States Colored Troops. The May Lunch and Learn will take place at noon inside the North Carolina History Center in downtown New Bern.

One of the first major recruiting efforts of free African Americans took place in New Bern, where Brigadier Edward A. Wild focused on establishing four regiments of United States Colored Troops. Smith will discuss the military service records of the USCT that volunteered to serve with the Union during the Civil War.

Tickets for each event are $6 per person and free for Tryon Palace Foundation members. Each Lunch and Learn will begin at noon and guests will meet in Mattocks Hall inside the North Carolina History Center. No food or beverage is provided.

May 23: Behind the Scenes: Costume Shop

May 28: Book Signing with Barry Milteer