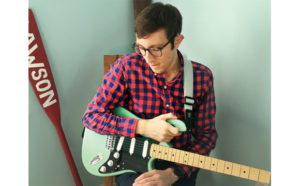 John Parker, Jr. is currently recording his second full-length LP under the moniker, tentatively titled “No Stranger”, with his newly formed backing band, The Postmortals. The moniker and project originated in 2014 with the release of “The Joys of Living In The Modern World EP,” and was created as a vessel for recording simpler, more straightforward songs than his work at the time as co-songwriter of the NYC area post – punk band Family Ghosts. With each release to follow (“Pseudocide” in 2015 and the “Adults Don’t Need Company EP” in 2016), the breadth and scope of the project has expanded; touching on subject matter both personal and social, with sonic influences ranging from New Order to Bright Eyes.

Enjoy more artistic demonstrations inside the Greater Good Gallery with Jon Derby, Lisa Bisbee Lentz and Carol Jones. Mockup pages of “A Brief History of Artists in ENC” will be on display. Artists are welcome to setup, please send an email or call 252-649-1712.