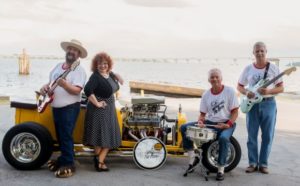 The Bears have quickly become New Bern’s favorite band for music of the 50’s, 60’s, and 70’s, played with gusto in arrangements that nail the sound of the original recordings.  Combined with humor, trivia, schtick, and audience-interactive fun, a show by THE BEARS is like a time-travel adventure!

Who are The Bears?

The Bears will take you on a musical journey through the Golden Era of Rock & Roll.  In the immortal words of the Go-Go-Gophers, “Whoopee, doopie, we have FUN!”