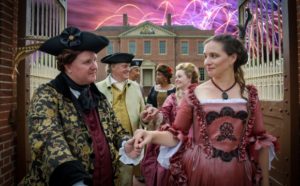 Tryon Palace’s annual holiday event, Candlelight: Colonial Christmas Celebration, returns for two Saturdays this year, Dec. 10 and Dec. 17, from 4:30 – 9:30 p.m. each night. Sponsored by First Citizens Bank and the New Bern Sun Journal, this famed North Carolina tradition is back with new holiday decorations throughout the grounds and holiday vignettes inside the Governor’s Palace and historic homes, all illuminated by the glow of candlelight.

Inside the Governor’s Palace visitors can step back in time to a critical point in the Revolutionary War. The year is 1781, New Bern has been raided by British forces and North Carolina’s Governor is held captive. However, with the recent retreat of the British from Wilmington, former North Carolina Governor Abner Nash has decided to embrace hope and help the citizens of North Carolina remember the good times from the past and those that will come after America has won its independence.

Inside the John Stanly House it is 1803 and the Stanly family is celebrating the return of John Stanly Jr. After the duel that led to the death of Richard Dobbs Spaight in September 1802, Stanly had to flee to South Carolina to escape charges for murder. His friends successfully petitioned North Carolina Governor Benjamin Williams to issue a pardon. With this news, John has been able to come back from exile and return to New Bern just in time for a Twelfth Night party with his family.

As all of New Bern rebuilds from a fire in June 1835, George Dixon is determined to give his children the Christmas he never had as a child. His wife, Antoinette, is more financially practical and is convinced they can give their children a good Christmas without breaking the bank.

In the Commission House Mr. and Mrs. Mohn are hosting a classic 1950s Christmas Eve party with their children, grandchildren and friends from town.

While walking around the candlelit grounds, visitors can watch the circus acts, fire eating, sword swallowing, and acrobatics of the Pickled Brothers Circus, the mysterious magic of 18th-century magician Rodney the Younger, the tightrope antics of Signora Bella, the joyous sights and sounds of the Tryon Palace Jonkonnu troupe, meet Father Christmas, interact with soldiers from North Carolina’s 1st Continental Line, and much more.

Food and beverages will be available for purchase at the new tavern on the Palace grounds, and hot cider and cookies are available from Mack’s Cider House in the Trades Building.

Each night of Candlelight concludes with a show of black powder fireworks on the Tryon Palace South Lawn.