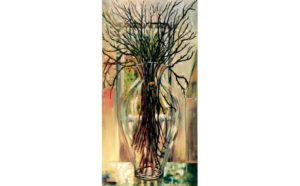 Join Craven Arts Council for Artwalk September 9th, 2016, from 5pm to 8pm at Bank of the Arts. This month will feature opening receptions for “Mum’s The Word” in the Main Gallery and Susan Sirkin in the Director’s Gallery. Artwalk presents a chance to meet the artists behind the show, and socialize in a beautiful setting surrounded by artwork.

Drawing on artists of all skill levels and mediums, “Mum’s the Word” highlights New Bern’s favorite flower, the chrysanthemum.  This exhibit has submissions from many local artists and even a few from as far as Pennsylvania. Works have been submitted in painting, glass, textiles, mixed media, and metal.  Artists include Sally Rowe, Chris Wagner, Sally Anger, Michel Dorsey, and many more artists at various stages in their careers.

Susan Sirkin is a local painter who work primarily in oils, and is an active member of local arts organizations. Susan Sirkin makes use of the palette knife technique in much of her work. Her paintings focus on the natural world, from the small scale of individual flowers, up to the beautiful landscapes of coastal North Carolina. Quoting the contemporary literature classic “Night Train to Lisbon,” Sirkin says “imagination is our last sanctuary.”

The September ArtWalk will also feature Dayton Vesper, performing on piano at Bank of the Arts starting at 7:30. Dayton Vesper has been an active solo recitalist in the coastal Carolinas for many years, having made several appearances on the Millenium Music Sunday Concert Series in Charleston, South Carolina. Mr. Vesper has a BM in Piano Performance and Pedagogy from East Carolina University (ECU). Mr. Vesper was a winner in the 1994 ECU Concerto Competition, performing the Grieg Piano Concerto with the ECU Symphony Orchestra. Donations during the performance will go directly to the performer.