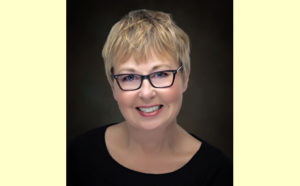 Coastal Women’s Forum (CWF) Introduced the New President, Jane Maulucci: A Succession of Strong Leaders is the Backbone of this Network of Dynamic Women during the CWF’s 2016-2017 kick-off dinner meeting on August 2, members and guests met a familiar face in a new position. Jane Maulucci assumed the title of President, from MaryAnn Jordan Yates, after two consecutive years of service in this capacity. But who is Jane, and what are her goals for the organization?

Jane is ‘The Reactive Voice’, – writer, voice actor, trainer and genius at crafting meaningful content for her clients’ websites and marketing materials, Add to her career accomplishments as a former Air Force broadcaster stationed in Germany, copywriter, reporter and B2B sales professional, and CWF has a president who brings an impressive and varied skill set to the table.

In November 2011, Jane and her husband relocated to New Bern, “to escape another Connecticut winter.” Although the only person Jane knew in New Bern was her sister, she soon became involved in her new community.

Introduced to CWF by a member, Jane joined the organization, and became an active participant. She describes her welcome as having been unique in her experience. “CWF welcomes you,” she said, “because we’re all sharing an experience: whether it’s personal or professional. And everybody in that room has something to share: something that will help you do something better, or just have a better day. I think that our monthly sessions are almost therapy.”

Jane’s array of talents, sense of humor and ’let’s get it done’ attitude made her a prime candidate for the CWF Board, where she was soon tapped to be MaryAnn’s Vice President. But being so new in the organization, Jane asked MaryAnn if she would stay on for a second term as President, so she could work toward being in a more stable position to take the reins. The Board agreed and Jane received the breathing space she needed. “Fortunately,” she said, “I got to work with MaryAnn for two years.”

Jane’s admiration and respect for MaryAnne’s accomplishments in reconfiguring the organization, increasing membership and member participation, as well as setting higher standards for CWF is evident. Noting that the CWF Presidency is “a phenomenal place to step into, but a tough act to follow,” Jane is committed to continue moving the organization in a positive direction.

The President’s theme for this year is, ‘Who Do You Know?’. “I really want to get our organization to recognize what a powerful networking group we are,” said Jane emphatically. “We need to realize we have so much available to us, and so much to offer each other. We find information and support you can’t find anywhere else. The internet doesn’t have all the answers, people do.”

“New Bern is truly a community,” Jane noted. “Think of anything that needs to get done and it will happen. And part of that is the phenomenal CWF women. There is not one woman in our group who is not connected to something else within our community.”

CWF extends a warm welcome to guests, and hopes they will want to join a thriving network that embodies all that can be accomplished by women of all ages, ethnicities and stages of life. Jane also has a message for current CWF members: “If you haven’t been to a CWF meeting lately, come on down, because we have evolved, and we’re going to keep moving forward.”