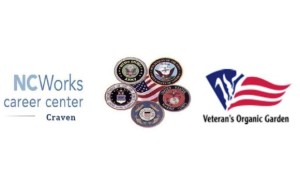 On Friday, September 16, 2016 in New Bern, the Veterans Organic Garden and NC Works, will host a veterans outreach with a special event called a veterans stand-down. This event will primarily benefit Homeless Veterans in Craven, Pamlico, Jones and Carteret County but is open to veterans of all eras.

What is a veteran’s stand-down? The original Stand Down for homeless veterans was modeled after the Stand Down concept used during the Vietnam War to provide a safe retreat for units returning from combat operations. At secure base camp areas, troops were able to take care of personal hygiene, get clean uniforms, enjoy warm meals, receive medical and dental care, send and receive mail letters, and enjoy the camaraderie of friends in a safe environment. We are expecting up to 100 Veterans that will be in need of services.

The New Bern Stand-down will be held Friday, September 16th from 9am-1pm at the National Guard at 301 Glenburnie Rd. in New Bern, NC 28562. The guest speaker for the event is Brigadier General Clarence Ervin, the Assistant Adjutant General of the Air North Carolina Air National Guard.

Through this stand-down and partnership with the local civic and veteran organizations, we will be able to provide needed intensive resources from federal, state, county and city agencies to homeless veterans or those in danger of becoming homeless. Military Officers Association, Food Lion, Trent Cadillac and many other organizations are sponsoring this event. Free rides to the event will be provided on September 18th by DAV chapter 40 and New Beginnings Ministry by contacting their County Veterans Service Officer or 252-514-4828 ext. 241 no later than 14 September. Hope to see you there!