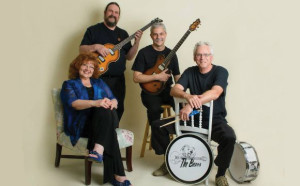 THE BEARS, New Bern’s favorite oldies band, perform music of the Fab Four from Liverpool, at The City Laundry in New Bern, Friday evening – July 8.  THE BEARS will perform a set of their favorites from the 50’s, 60’s, and 70’s – then come back for a second set of mostly-Beatles material.

– Janet Montero is “Mama Bear”: she sings and plays bass.

– Pat Engeman, “Yogi Bear” is the drummer, as well as a singer.

– Simon Spalding is “California Bear”, on bass, fiddle, and guitar.

THE BEARS are one of eastern North Carolina’s most entertaining bands – don’t miss them playing the music of The Beatles!

Submitted by: Simon Spalding, THE BEARS