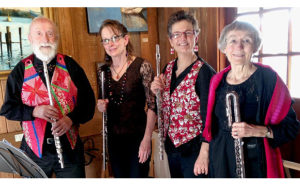 The Pamlico Flutes will present a flute concert for Fairfield Harbour and surrounding communities on Saturday, June 18 at 3pm at the FH Community Center.  The Fairfield Harbour Community Center is located by the Fire Station on Broad Creek Road. The Pamlico Flutes will offer an eclectic program of music from the Baroque, Classical and Romantic periods to more current selections by Henry Mancini, Andrew Lloyd Weber and George Gershwin. These musicians bring more than 200 years of musical experience to the stage. They are looking forward to sharing the fruits of their musical passion with the Fairfield Harbor residents.

Tara Howard-North resides in Oriental where she sings and plays with the Pamlico Chorale, the Pamlico Community Band, the Coastal Notes Woodwind Quintet and the Tryon Palace Fife and Drum Corps. Howard-North is glad to dust off her music education degree and laughs, explaining that she “holds the title of Benevolent Dictator with the Pamlico Flutes.” She also works as project manager for a national construction management firm, currently at Camp Lejeune.

Michelle Noevere operated a restaurant for fifteen years in the British Virgin Islands before discovering Eastern North Carolina in 1997. Ten years later she pulled out her high school flute. She met Tara in the Pamlico Community Band and they formed the Pamlico Flutes. When she is not playing the flute, she is running half marathons, gardening and is Assistant to the president of Pamlico Community College.

Janis Rott started voice and music training at age 7. She continued through school, playing for different bands and orchestras. There were occasional interruptions in order to travel, explore, work abroad and sail several long ocean voyages with her husband.  Over the years, she played for numerous Spirit of Christmas events, musicals, home tours, art fairs and nursing homes. Now she adds the “low” voice (alto flute) to the Pamlico Flutes.

Denton Dodd took violin lessons when he was 8 years old and played various instruments as his interests changed. He bought a second-hand flute while teaching. He continued to play it off and on, retired and cruised down the east coast until he stopped in Morehead City. He pulled into a slip and remained. During a wild hurricane season, he and his wife cruised into Fairfield Harbour and decided to stay. After playing with the Downeast Dulcimers and Thursday Morn, both Fairfield Harbour groups, Dodd joined the Pamlico Flutes. He plays the penny whistle, flute and fiddle for Irish Night at the Trent River Coffee House.