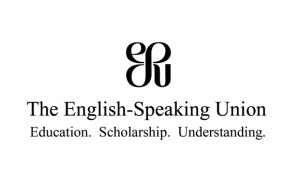 The lecture will be accompanied by a PowerPoint “slide show” entitled “The Bayeux Tapestry” given by Dr. Caroline A. Paul, assisted by her mother, Jean W. Albanese, English Speaking Union (ESU) Publicity Chair.

The Bayeux Tapestry, one of the best preserved remnants of the Middle Ages, is a 227-foot long, 20-inch wide strip of embroidered linen depicting the Norman Conquest of England in 1066 – from events leading up to it through the Battle of Hastings, itself.  Made shortly thereafter, the Tapestry brings the story to life in 72 scenes, literally history’s first cartoon strip.

Caroline Paul’s lecture will cover the events shown in the Tapestry about the contest for the throne of England between Harold Godwinson, an English earl (later king) and William, the Duke of Normandy. It is a tale of ambition, heroic bravery, armed conflict and possible treachery culminating in a bloody battle for a kingdom. The talk will go on to tell the story of the Tapestry itself and its many adventures through the ages from an obscure artifact of medieval times, to a coveted propaganda tool, to an invaluable historical treasure appreciated the world over today – a tale of miraculous survival.

For those of you who are interested in embroidery, Caroline will also describe how the Tapestry was created and present an exact replica of one of its scenes which she has stitched herself.

Dr. Caroline A. Paul received her B.A. from Barnard College, Columbia University, in New York City where she majored in Medieval Studies. She received her medical degree from Columbia College of Physicians and Surgeons in 1994. She is now a general surgeon practicing in New Bern since 2000. Among her many interests are genealogy and all kinds of stitchery, including “Opus Anglicanum”, the type of embroidery used in the Tapestry.

The presentation will be held at 4:30 p.m., Friday, May 13th at Carolina Colours Pavilion, 3300 Waterscape Way, New Bern.

Submitted by: Jean Albanese, Colonial NC Branch of the ESU