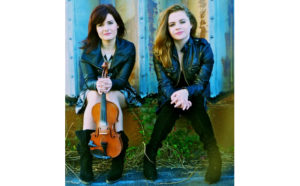 Award nominees, Celtic sister duo Cassie and Maggie encompass everything you could ask for in a musical act. Exciting and innovative, they have found a perfect balance between musical integrity, and sheer entertainment.

While staying true to their Celtic roots, they have explored and tested the boundaries of traditional music, bringing a breath of fresh air to the genre with original compositions and arrangements. They have been enchanting audiences far and wide with their infectious energy, driving rhythms and lilting melodies.

Cassie and Maggie are hitting the road for four months of shows and festival  appearances across the US and Canada. Highlights include; The Ocrafolk festival on Ocracoke Island, NC, June 3-5; Trent River Coffee Co in New Bern, NC, June 10; Isis Music Hall in Asheville, NC, June 11; and The Rooster’s wife in Aberdeen, NC, June 12

In anticipation of their new studio album “The Willow Collection” (official release  September 25) Cassie and Maggie will be debuting new material from the record at each show. Featuring 11 tracks of traditional and original songs and instrumentals, each inspired by the theme of the Willow Tree, The Willow Collection features the tight vocal harmonies and electric instrumental work the sisters have become known for over the past three years of recording and touring.”

Submitted by: Mike Afflerbach on behalf of Cassie and Maggie