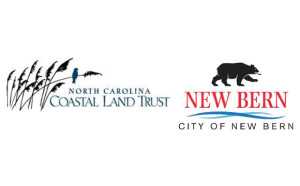 The City of New Bern completed purchase of a 1.581-acre parcel of land on Country Club Road adjacent to the 140-acre Lawson Creek Park. The parcel, which is located on the water, is intended for recreational use, and is ideally suited for access to the water for paddlers. In addition, the site has an existing 2,700 sq. ft. building, which can be used for Park and Recreation Department offices, for canoe and kayak storage, and for restroom and shower facilities for visitors.

“By acquiring this property, the City will now be able to offer services to its citizens that have not been available in the past,” said Mark Stephens, New Bern City Manager. “These activities include but are not limited to canoeing, kayaking, sailing, and paddle-boarding. The collaborative effort between the Coastal Land Trust, the Bate Foundation, and the City of New Bern is a testament to successfully cultivating partnerships to enhance community amenities and offerings while meeting the core values of our non-profit agencies. We are also especially appreciative to the owner, former New Bern resident Mary Ann Harrison, who was also committed to the success of this project, for selling the tract for far less than its appraised value.”

“The Coastal Land Trust is grateful to the Harold H. Bate Foundation, and thrilled to be able to contribute to this project”, said Janice Allen, Deputy Director of the Coastal Land Trust. “The location of this parcel on New Bern’s waterfront means that lots of people will be able to get outside and enjoy the region’s beautiful waterways.”

The Coastal Land Trust assists communities like New Bern in creating parks and nature preserves. It played a key role with Craven County in establishing the Latham –Whitehurst Nature Park on Upper Broad Creek; with the City of Havelock at its Slocum Creek Waterfront Park; and with many other communities up and down the coast.

The property purchased will be a wonderful recreational site for residents of New Bern. The site is strategically located, and will be part of New Bern’s Riverwalk, which will eventually link all the city’s waterfront parks, from Union Point Park on the Neuse River, to Leander Morgan Park on the Trent, and on to Lawson Creek Park and Tryon Palace. In addition, it is in a location that will allow it to serve a significant role in the City’s “Gateway Renaissance Plan” to transform this area of New Bern into a cultural hub and gateway to the city. The City considered this property to be a very high priority.