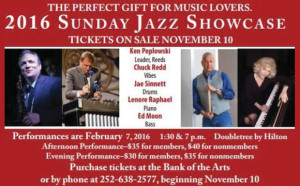 This year is the 27th annual Jazz Showcase in New Bern, North Carolina.  The show originally began in 1989, the brain child of John Sturman and his wife, Hanna.  The couple are avid jazz lovers, and each year they work on bringing world-class talent to New Bern.  It has been sponsored by the non-profit Craven Arts Council & Gallery since its inception.  The Craven Arts Council’s mission is to advance art and cultural opportunities within the community, and they have always embraced music and the performing arts part of that goal.

The 2016 jazz performer lineup proves that Mr. Sturman has outdone himself once again.

The leader is Ken Peplowski, also on the reeds.  In 2013, Russell Davies of BBC2 said that Ken is “arguably the greatest living jazz clarinetist.” – KenPeplowski.com   Ken played music his entire life, with his first paid gig coming while he was still in elementary school.  At this point, Ken has recorded about 50 CD’s as a soloist, and is on about 400 others as a sideman.  He’s performed and recorded with names like Woody Allen, Madonna, and Benny Goodman, and has headlined at venues from the Hollywood Bowl to Carnegie Hall.

On the piano is Lenore Raphael.  Lenore has won ASCAP awards and has been nominated for Grammys for her original compositions, which appear on her 7 CD’s as well as others.  She’s taught Jazz at the Master’s level, and she has her own radio show where she interviews and performs with famous jazz musicians.  Brian Hough of Jassman Magazine said of Lenore, “This blond Ambassador of Steinway will musically knock your socks off!” – Lenoreraphael.com

Chuck Redd – who the Jazz Times calls “exquisite” – will be playing the vibraphone at the Jazz Showcase.  He’s been featured on 70 recordings, and has played at such places as the White House, the Tonight Show, and Carnegie Hall.  He is a professor at the Master’s level and was a member of the Smithsonian Jazz Masterworks Orchestra for 15 years. – ChuckRedd.com

Ed Moon will be on upright bass.  Ed, of the Ed Moon Trio, has performed in countless venues, and is a regular at popular jazz café’s in Raleigh, NC.

Jae Sinnett will be playing the drums.  Thirteen recordings; 150 compositions; 5 music scores for documentaries – these are just some of Jae’s many accomplishments.  He currently hosts two jazz shows with NPR-affiliate WHRV-FM. – Jaesinnett.com