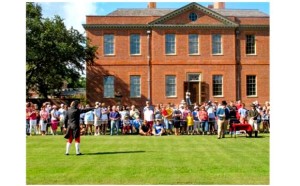 Tryon Palace’s South Lawn will echo with gunfire and drumrolls during a live reenactment of the Stanly-Spaight Duel, held Labor Day weekend on Saturday, Sept. 5, at 4 p.m.

More than two centuries ago, on Sept. 5, 1802, prominent New Bern lawyer John Stanly, Jr. met his political rival, Richard Dobbs Spaight, for a lethal duel on the streets of New Bern. Spaight, who had served as North Carolina’s first native-born governor, was mortally wounded after four rounds and Stanly was forced to flee the city. Stanly was eventually able to return to New Bern when his friend, Judge William Gaston, who convinced the governor to grant North Carolina’s first gubernatorial pardon to Stanly.

Beginning with a performance by the Tyron Palace Fife and Drum Corps at 4 p.m. on the South Lawn, visitors are invited to watch the drama unfold. In the event of rain, performances will be moved into the North Carolina History Center’s Cullman Performance Hall.

September 17: Voices from the Harlem Renaissance