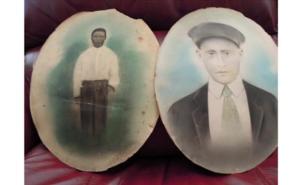 Members of the Philyaw family are busy working on a May 2015 reunion plus refurbishing the Royal Oaks also known as the Philyaw Family Cemetery in Comfort, Jones County, North Carolina. At a recent meeting to review old family photos, one of the cousins brought a large framed picture of her grandfather, Edward Philyaw (1902-1980), taken 92 years ago in 1923 in Kinston or Goldsboro, North Carolina to share, but she also wanted to show a second photo that had been placed behind her granddad’s picture – the mystery picture!

She told her cousins that her grandmother, Cassie Dunn Philyaw (1901-1975), told her “I had this picture taken of your Grandpa when he was 21 years old, but I did not like the way they did the bib on his cap so I had them reprint the picture.” The picture hung in our cousin’s living room for a few years and one day she decided that the inside of the oval curved glass needed a good dusting. When she removed the picture, to her surprise she found a second picture that was placed behind Edward’s picture. She dusted, cleaned, and put it all back together. Like many old family pictures this one ended up in the back of a closet until recently.

Now the mystery is the second picture of a well dressed, African-American gentleman. Our family does not have a clue who he is or why the shop owner put his picture in the back of Edward’s picture.

Our thought is perhaps it was an extra and rather than toss it, the shop owner used it as backing to hold the first picture in the frame. There are no studio markings or writing on the front or back. We are glad the photographer and our family kept this picture. If anyone can help us find the family of this young gentleman, we would be delighted for his picture to be reunited with his family.

If you have any information on this gentleman, please contact David French with the Family History Society of Eastern North Carolina at 252-349-0405.