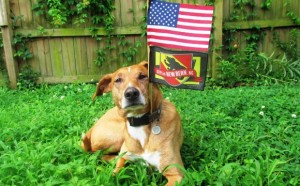 I love, love, love dogs and cats. And also love a good animal story. My neighbor told me one that he experienced flying home from visiting his sister and having a long layover in Atlanta. We all know how boring that is. He noticed an elderly gentlemen sitting by himself with his satchel besides him. Gerry decided to sit down with this man and talk away some time. The gentleman had quite a story to share. He was born in North Dakota 93 years ago. The years after his birth were hard times and the area was greatly affected by a major draught. With no jobs available and his family being farmers they moved to Minnesota where he grew up, met his wife and settled down. In a few years, floods caused a major economic down turn and he was again forced to move. This time his family headed south and landed in New Orleans.

I don’t have to remind you of the devastation of Katrina. His beloved wife died, he was forced to move into a small house with many other people. He was depressed, lonely and not sure that life was worth living.

Also in the flooded area, trying to survive and much of the time just keeping her head above water was a tiny little dog. She too had lost everything – her family, her home and her security. Everywhere she looked there was devastation. Hundreds and hundreds of people were homeless. No one could help. She didn’t have a safe, dry place to land or food to eat. Somehow or another; she found herself in this run down house with far too many people. There was a lonely sad man that looked as depressed and hopeless as she did. She could tell that he was deeply grieving and that he had tears in his eyes. Maybe she could cheer him up. Two lost souls that had nobody. It was worth a try – so she climbed up on his lap and snuggled – the first time in a long while that she was dry and felt safe. The lonely man took one look at this little girl dog and decided that she was sent from heaven and put his arms around her. He thought that they would make a good team. What should he name her? She reminded him of his beloved deceased wife so he decided to name the little dog after her.

Years have gone by. The waters have receded and New Orleans has recovered. Well, maybe not all areas and all people but homes are rebuilt and businesses are again thriving.

Are you wondering what happened to this man and the little dog? Well the man was on his way to visit his sister in Baton Rouge, and in the satchel by his side, laid a little Chihuahua. The little dog was perfectly content; legs crossed lying in the carrying case next to his person ready for anything that comes along in life. Together they could handle anything.

I love this story. It is so amazing how much love there can be between a person and his/her four-legged companion. Friends and family members can come and go, weather and tragedies can up-root your life but the love of your little friend is as good as it gets.  Sometimes I think that these wonderful dogs are sent by angels, just when life gets too unbearable, they come along and bring us love and light. And together we can weather all the storms and move forward.

If you are looking for a new friend in your life, I hope that you will adopt a rescue dog or cat and not purchase from a breeder or pet store- or worse yet, online. There are so many wonderful, lovable dogs and cats looking for a person to love. So many times, they are euthanized because no one wants them. Our animal shelter and rescue groups are full of these angels that can make a big difference in your life.

Give me a call, Bonnie at Pals for Paws. Go to www.palsforpaws.org to see the New Leash on Life dogs that are available. These wonderful rescue dogs are well trained, housebroken and ready for a second chance. The next graduating class is ready for adoption on January 7th.  252-638-2358