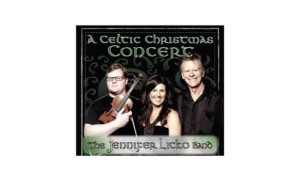 Concerts will be held inside Cullman Performance Hall on

The Jennifer Licko Band will perform “A Celtic Christmas” concert at the North Carolina History Center on Dec. 11 and 12. Both shows will begin at 7:30 p.m.

Licko, the band leader, is a respected musician within the Celtic genre who masterfully combines the Appalachian music of her North Carolina roots with the traditional Celtic music of her ancestors. The Jennifer Licko band includes three-time, All-Ireland fiddle champion, Dylan Foley and British music producer Bob Noble on keyboards and vocals. Noble’s credits include work as a producer for Dexy’s Midnight Runners, Joan Armatrading, Cliff Richard, Bob Geldof and more.

Holiday music has strong roots in Celtic traditions and Licko will be singing familiar Christmas songs such as “We Three Kings” and “What Child is This.” Some songs will also be in Gaelic, including her original, “Nollaig na mBan” (Women’s Christmas).

Licko’s most recent album, “A Thousand Curses Upon Love,” has received critical acclaim from the Celtic/Folk and World music community and is receiving national radio airplay.

Tickets are now on sale at the North Carolina History Center, located at 529 South Front St., New Bern, NC, and online at www.tryonpalace.org.

This concert is sponsored by Emerald Isle Realty.