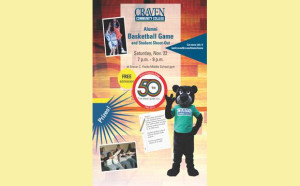 In honor of its 50th Anniversary, Craven Community College (CCC) will be holding a Craven Panthers alumni basketball game and student shoot-out on Saturday, November 22 at Grover C. Fields Middle School in New Bern. The doors will open at 6:00 p.m. Game begins at 7:00 p.m.

The alumni basketball game will feature CCC student players from past years. The student shoot-out will occur during the half-time break. Ten current CCC students will compete for a grand prize of a set of new tires (up to $500) donated by Baldree’s Tire of Havelock. Competing students will have 30 seconds for a lay-up, free throw shot, 3-point shot and half-court shot. The student who makes all four shots will win. If any students tie, there will be a sudden death elimination shoot-out.

More information about the alumni basketball game, and the college’s 50th anniversary can be found on CCC’s website: www.iamcraven50.com.

Founded in 1965, Craven Community College is part of the North Carolina Community College System.  In the 2014-15 academic year, the college celebrates its 50th year as an independent institution. With campuses in New Bern and Havelock-Cherry Point, Craven serves about 3,200 curriculum students and more than 10,000 continuing education students each year. The college offers a wide range of associate degree and certificate programs, as well as college transfer courses, career and occupational offerings, partnerships with four-year universities, specialized workforce training options, developmental studies and basic skills classes. Craven Early College High School programs are available on both campuses. Craven is also home to Public Radio East, one of the few community colleges nationally with this distinction. For more information about the college, visit www.cravencc.edu.