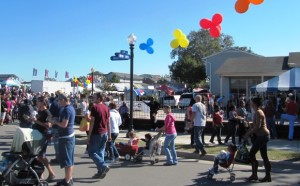 The XPOGO team performing at MUMFEST on October 11-12 currently holds 15 world records and several Guinness records. This is the most talented and experienced extreme pogo team in the world! Their past performances – from Rio to Beijing to Hong Kong and later this year in Sweden and France truly make them world class athletes.

Extreme Pogo or Xpogo is an action sport performed on next generation pogo sticks that have the potential to bounce over 10 feet in the air, measuring from the ground to the bottom of the tip of the pogo stick. To see videos of the XPOGO team visit: www.xpogo.com. For the team’s performance schedule at MUMFEST visit: www.mumfest.com prior to the event.

Next up is a different kind of extreme show. The great Italian equilibrist Signora Bella is coming to MUMFEST! She juggles flaming swords while balancing on the razor sharp orb of doom! Watch her as she walks the slack rope juggling sharp knives…Signora Bella is simply amazing!

Signora Bella, the Great Italian Equilibrist, has entertained audiences of all ages since her arrival on the eastern seaboard several years ago. She has performed on the streets of Williamsburg, Mount Vernon (home of the first President of the United States) and at Poplar Forest, retreat home of our third President Thomas Jefferson. She has also performed at Tryon Palace, home of North Carolina’s colonial governor, William Tryon.

With great zest Signora Bella brings to life the tradition of the traveling performers of the seventeenth, eighteenth, and nineteenth centuries. His Excellency, George Washington, who enjoyed theatrical diversions, once wrote of seeing a slack rope walker in Philadelphia at Rickett’s Circus.

Tracing her roots to the Italian theatrical style of Commedia Dell’Arte, Signora Bella has stunned the masses with her feats of balance and amazed audiences with her juggling of sharp Turkish swords and flaming torches. George Washington may have missed her but you don’t have to!

Traditional MUMFEST favorites include Alex Clark, performing jaw dropping stunts, the Purina Incredible Dog Team with amazing aerial disc catches, the Silver Drummer Girl, a Model Train Show and NBPD’s K-9s will be back along with Weller Retriever demonstrations. Be sure to stop by the out of water 13th Annual Boat Show, always a treat for boaters and wannabe boaters. Try your hand at songwriting and get feedback from published songwriters performing their original songs on Sunday.

Come to MUMFEST on foot or bicycle, hop on the free trolley or park downtown – however you get here – come join in the fun because there really is something for everyone!