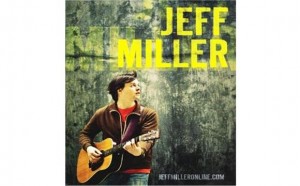 Wheelrock Entertainment is excited to welcome Jeff Miller – Acoustic looping master – singer, songwriter – for his 4th  tour to Trent River Coffee Company Friday, July18 from 7:00-9:30 pm sponsored by Comfort Suites of New Bern. Tickets are $10.00 and can be purchased at Trent River Coffee Company or by calling 252-639-1644. Seating is limited. Tickets sold out for previous shows!! Don’t wait to purchase your tickets – get them TODAY!

Jeff Miller lives in Nashville, TN with his wife Debi and son.  A degree from Boston’s Berklee College of Music, a move back home to Pittsburgh, a move to Nashville, and 3 solo albums (and an EP) later, Jeff Miller is hot on the music chart. In fact, he plays over 150 shows a year, touring the east coast and the mid-west. His music has received airplay at over 175 stations, in the U.S. and abroad. At his live shows, he uses a device to record and loop guitar and vocal parts, creating more sound than many bands do. Using his voice, guitar, hands and feet, he is able to act as each member of a regular band – a singer, guitarist, bassist, even a drummer. In 2013, Jeff started using the Ditto Looper, the smallest looping pedal in the world. He currently uses it and the Boomerang Plus at his live shows. Shortly after getting the Ditto, Jeff began his “Loop of the Week” video series on his YouTube channel. Each week, a new improvised piece of loop-rich music is added to the series. The channel now gets between 3 and 5 thousand views a month.

In 2014, Miller’s acting career began, as he worked as an extra on the ABC’s hit show “Nashville”.

To hear samples of Jeff’s music visit www.jeffmilleronline.com.. Jeff’s reviews speak for themselves:

“I don’t know how he does what he’s doing, but it’s amazing.” -Gary Burr, hit songwriter and member of Ringo Starr’s All-Starr Band

Armed with only an acoustic guitar, Pittsburgh native Jeff Miller, now based in Nashville, uses looping pedals to create rhythm tracks, backing vocals, extra guitar parts — all live, all on the fly. Fortunately, Miller’s not just some gearhead, but a talented songwriter with a strong, clear voice — in evidence on [‘Can You Hear the Music?’].” -Aaron Jentzen, Pittsburgh City Paper

“His music is timeless. Like other notable purveyors of pop, such as Todd Rundgren, Badfinger or Ben Folds, Miller isn’t afraid to embrace and wield melody as a musical weapon. But instead of doing damage, the songs on “Seesaw” are infectious delights, from the Abbey Road-fueled ‘Scars’ to the sunny-side sound of ‘Can’t Take it With You’ and its contrasting lyrical sentiment. Miller even shows a new, heavier side in ‘The World is Out to Get You,’ arguably the album’s best track.” -Rege Behe, The Pittsburgh Tribune-Review

“Miller comes to Nashville by way of Pittsburgh. He comes packing three excellent albums. Each has Jeff’s own distinctive brand of acoustic pop/rock – with great hooks and songwriting sensibilities. Jeff has been slowly but surely gaining in National popularity – he recently performed on Fox in the Morning, Lightning 100 featured his song ‘Scars’ on the Local Lightning Spotlight, and he’s received airplay at over 175 stations in the US and abroad. Jeff is an independent artist at the moment, though I suspect he will be picked up soon. He’s released three great albums, he’s touring, has a large fan base, is getting TV and copious amounts of radio play on his own, and is working on going into the European market. Come to think of it, he may not need or want a label. But that leaves good management and tour representation wide open.” –Paul King, Nashville Hype