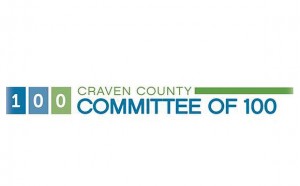 The new EDO is a partnership of public entities and private sector resources working together for the economic benefit of the county. The cities of Havelock and New Bern had recently voted to join the County in this partnership and the Committee of 100 is now committed to it as well.

On hand were invited guests New Bern Mayor Dana Outlaw and Interim City Manager Mark Stephens; Havelock City Manager Frank Bottorff and Commissioner Karen Lewis; and Craven County Manager Jack Veit and Commissioner Jeff Taylor. All were enthusiastic in promoting the benefits of the EDO to the Committee and strongly encouraged the endorsement. Commissioner Taylor stated, “This is an historic undertaking for the County. I am eager for this new organization and I am looking forward to a big bright future for Craven County.”

Mayor Outlaw commented that by joining forces the EDO becomes, “… A solid group with a bigger bang.”  While Mr. Bottorff noted that Havelock is ready to participate, “We need to get together and write the bylaws.”

Mr. Downs gave a brief review of the proposed EDO and then opened the floor to questions which focused on the timeline and the next steps needed to get the plan in place.  Committee Chairman Owen Andrews answered that it was a matter of developing new bylaws for the EDO and “Ideally, the EDO should be in place in by the end of summer.”

After the vote, Mr. Pridgen thanked Chairman Andrews and President David Stroud for all their efforts over the past 8 months to bring this to fruition.