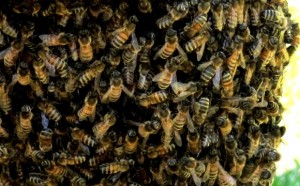 Honeybees have been mysteriously disappearing from their hives. Known as Colony Collapse Disorder, this phenomenon has brought beekeepers to crisis in an industry responsible for producing one out of every three bites of food on our tables. The film follows commercial beekeepers David Hackenberg and Dave Mendes as they strive to keep their bees healthy and fulfill pollination contracts across the U.S. It explores their struggles as the two friends plead their case on Capitol Hill and travel across the pacific in the quest to protect their honeybees. Filmed across the U.S., Europe, Australia and Asia, this documentary examines the alarming disappearance of honeybees and the greater significance for the relationship between mankind and nature.

Following the film, local experts will be on hand to answer questions about beekeeping, creating an inviting environment for bees in your yard and availability of local produce grown through the use of honeybees.

This is the first of a series of films dedicated to environmental issues of concern to local citizens of eastern North Carolina.

To sign up for information about the Carolina Nature Coalition’s film series or other notifications, contact carolinanaturecoalition@gmail.com