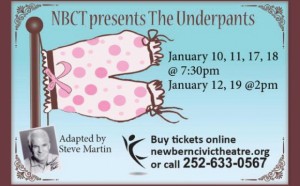 Taking place in a caricatured version of 1910 Germany-a world of peasant dresses, wieners and anti-Semitism, The Underpants gets moving when the underpants get moving; southward. At a parade for a King, a beautiful woman stands up high to get a better view, a knot breaks, and her underpants accidentally drop, giving everyone around a tantalizing glimpse of her bloomers expanding into fast-moving, object-flying, don’t get caught in a compromising position farce. It rises to the challenge of a humorous battle of wits, wrapping it all up in a character-driven comedy about a woman’s discovery that her marriage is unsatisfying and her dilemma of what to do about it.

New Bern Civic Theatre will open its 2014 season on January 10 with this Steve Martin adapted comedy that drew rave reviews in New York, Sarasota and several West Coast cities. Two Sunday matinees of The Underpants will take place at 2 PM on January 12 and January 19, the same days that Divisional Playoffs and AFC and NFC Championship games will be drawing men to their TV sets, begging for a Sunday without distractions.

Football widows and non-football addicts, here is a perfect opportunity for a THEATRE PARTY to salvage a Sunday afternoon at the theatre, and come away smiling, far from the yelling and screaming of end of season football chaos. Additional performances will take place on January 10,11,17 and 18 at 7:30 PM. Ticket information is available at New Bern Civic Theatre, 414 Pollock Street, New Bern, or you can call at 634-9057 or order tickets online at www.newberncivictheatre.org. Ticket prices are $17.00 in advance, and $19.00 at the door.