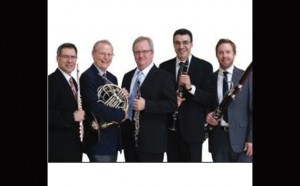 The Ventus Quintet welcomes pianist Barbara McKenzie for a night that celebrates France’s most inspiring and lighthearted musical tastes. Presented by the American Music Festival and the Tryon Palace Performing Arts Series, Ventus promises to bring each audience member into the captivating world of French wind music with a concert of humor-filled, full-throttle virtuoso antics for flute, clarinet, oboe, horn and bassoon.

The evening will begin with a preconcert conversation with the artists at 7 p.m., followed by the musical performance at 7:30. Doors open at 6:45 p.m. and tickets are as follows: $25 for adults, $20 for Council of Friends and Active Military, $10 for students.

Ventus is presented by the American Music Festival and the Tryon Palace Performing Arts Series. Media sponsorship has been provided by Public Radio East and the New Bern Sun Journal.