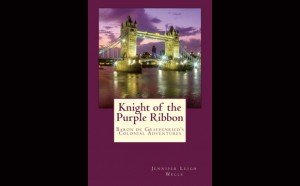 The newly released “Knight of the Purple Ribbon: A Novel (Baron de Graffenried’s Colonial Adventures)” is a historic novel based on the real life adventures of the charming Swiss nobleman Baron Christoph de Graffenried, (ancestor to former First Lady Laura Bush, Senator Charles Robb and Pulitzer Prize-winning author Ellen Glasgow). The book focuses on de Graffenried’s founding of New Bern, the second oldest town in North Carolina in 1710, and is filled with drama, romance and suspense.

The novel is penned by de Graffenried’s descendant Jennifer Leigh Wells, who is a freelance journalist and short story author. The name of the book, “Knight of the Purple Ribbon” comes from one of de Graffenried’s titles. He was given the titles Baron of Bernberg and Knight of the Purple Ribbon by the British government when he agreed to form the settlement for German and Swiss religious refugees, which became the town of New Bern. The novel is based in part on de Graffenried’s own memoir, “Relation of my American Project”, which centers on the exciting times he had while founding and governing the settlement, as well as his harrowing experiences as a prisoner in an Indian village during the Tuscarora War. “Knight of the Purple Ribbon” follows de Graffenried as he goes from being the reckless black sheep of his illustrious family to the head of a colonial settlement, carved out of the wilderness, with his beautiful, spirited bride at his side, whose love sustains him though the struggles and hardships.

The book is as much of a romance as an adventure. Christoph meets the noblewoman, Lady Jayne Stephens at the British court shortly before his departure to the New World. The two quickly fall in love, prompting her to leave her tyrannical fiancé and elope with Christoph, a widower in the novel, the very day he sets sail. Although Jayne is a fictional character, she was inspired by an impoverished British noblewoman Christoph wanted to marry in his youth.

In most respects, the novel closely follows de Graffenried’s memoir, especially in regard to the founding and maintaining of New Bern and the depiction of other historic events.

Along with the drama there are also many lighter moments. The real Christoph de Graffenried was a man of great wit, a quality which is thoroughly showcased in the novel.

This story takes the reader from Bern, Switzerland’s Castle Worb, where de Graffenried grew up, to the lavish 18th century British court, to the wilds of the New World. Historic events in which de Graffenried played a key role, such as the Tuscarora War and Cary’s Rebellion, are detailed and brought to life from a human perspective.

The book is available for purchase through Amazon in paperback and kindle format.