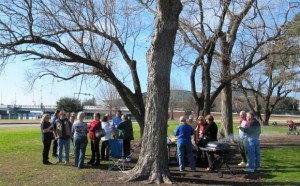 The first BBQ Picnic was held in the Croatan National Forest next to a beaver dam last summer.

More people turned out for the second BBQ at Union Point Park. This time we decided to have a jar for people to donate a few dollars and write down their favorite charity to win the money by a drawing at the end of the event. The lucky non-profit was the New Bern Historical Society and received $45 in donations. 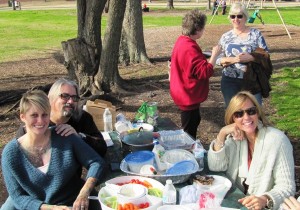 Over 30 people gathered at the Lions Shelter at Glenburnie Park for our 3rd BBQ Picnic. The menu expanded from Buffalo wings, pulled pork, chicken tenders, coleslaw, to special recipes and food that guests brought to compliment the main courses! We collected $94 and all the money was donated to Bike MS: Historic New Bern Ride!

New Bern Parks and Recreation does a fantastic job maintaining 20+ parks. Although the City of New Bern was doing construction at the Main Entrance to Union Point Park today, we had a good turnout! Special thanks to everyone who came out to enjoy the beautiful weather and mingle! 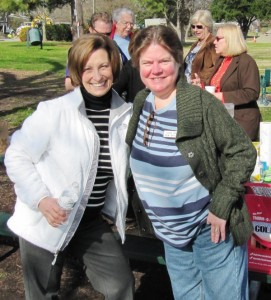 We’d like to give special thanks to everyone who came out to enjoy the BBQ, beautiful weather and who donated to their favorite charity (raising $67).

It was really good to see friends and others who I’ve corresponded with via email and/or Facebook and finally meeting them in person! We had a great time and can’t wait until the next one!

The next BBQ hasn’t been scheduled yet, but will probably happen at the end of February or the beginning of March. Please let me know if you will be attending so we will have enough food.

Thanks to Laura Johnson for cooking the pulled pork and helping me prepare everything. I couldn’t have done it without your help!