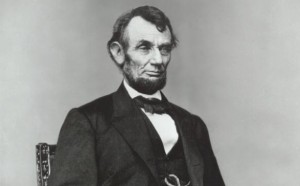 Image taken from the Lincoln Library

The Emancipation Proclamation celebration committee of New Bern has announced plans to celebrate the 150th anniversary of President Abraham Lincoln’s historic Emancipation Proclamation. The celebratory event will be held on the Craven County Courthouse grounds on January 1, 2013 at 12:00 noon and will feature patriotic music, historical reenactments with costumed characters, and a dramatic reading of the Emancipation Proclamation. Several noted speakers have been invited including well known historian David Cecelski, author of recently released “Fire of Freedom”. Immediately following the program a reception will be held at the Tryon Palace Commission House located at the corner of George and Pollock Streets.

“New Bern was one of the very first towns in North Carolina to celebrate the Emancipation Proclamation which was the initial presidential action to officially begin the dismantling of the institution of slavery in this country. President Lincoln’s Emancipation Proclamation heralded a decisive change in the Civil War’s purpose from solely a war to save the Union to a war to save the Union and abolish slavery,” said Barbara Lee, celebration committee chair. According to James City native Craig Allen, “the Emancipation Proclamation encouraged tens of thousands of slaves to flee to the safety of Union lines and eventually led to the founding of the historic Trent River settlement now known as James City, across the river from New Bern.”

Local historian Bernard George is excited about the opportunity to recognize and highlight the rich history of his hometown and the important role its African American citizens played in the “new birth of freedom” that President Lincoln spoke about in his famous Gettysburg Address. “Today America is considered a beacon of democracy and freedom to the world because visionary leaders like fellow New Bernians Abraham Galloway, William Singleton, Mary Ann Starkey, John Good, Rev. James Hood, George White, J.C. Price, Rev. George Rue and others fearlessly championed human rights during this pivotal period,” said George. Although the Emancipation Proclamation only freed slaves in Confederate controlled areas, the decree allowed the official enlistment of more than 180,000 African American Union soldiers to fight for the freedom of their families and fellow bondsmen. New Bern served as recruitment headquarters for more than 5,000 local Civil War soldiers comprising the 35th, 36th, & 37th regiments of the United Stated Colored Troops.