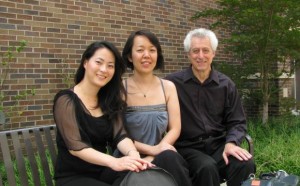 The ECU Piano Trio is sure to delight fans of classical music as they perform at Tryon Palace’s Cullman Hall at 3:00 p.m. on Sunday, October 21. This concert, part of Tryon Palace’s 2012-2013 Performing Arts Series, features cellist Emanuel Gruber, formerly the principal cellist of the Israeli Chamber Orchestra. Gruber is a celebrated virtuoso whose mastery of the cello has earned awards from Tel Aviv to St. Petersburg. He will be joined by violinist Hye-Him Kim, winner of the 2009 Concert Artists Guild International Competition; Kim has played with some of the world’s most distinguished orchestras. The trio is rounded out with pianist Keiko Sekino, who performs regularly as a soloist and in chamber music groups throughout the United States, Europe, and Japan. Sekino, who has also played with the BBC Concert Orchestra and the Seoul Philharmonic, is the recipient of the prestigious Presser Music Award.

Together, the ECU Piano Trio offers an afternoon of great listening that weaves the repertoire of well-known Romantic composers like Beethoven and Brahms with early twentieth-century composers such as Reinhold Glière, whose work celebrates Russia’s traditional music.

Ticket prices are $20 general admission, $17 for Tryon Palace Council of Friends members, and $10 for students with ID. Tickets are available online at www.ecuarts.com or by calling 1-800-ECU-ARTS (328-2787).  Tickets will also be available the night of the performance at the North Carolina History Center.  Seating is general admission.

For those guests who are hard of hearing, special devices are available. Please contact Penne Sandbeck at (252) 639-3593 or pssandbeck@tryonpalace.org 48 hours in advance to make arrangements.