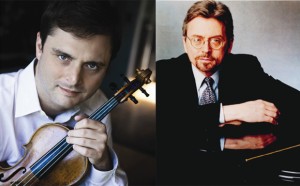 The Four Seasons Chamber Music Festival opens its inaugural season in New Bern with a concert on Friday, October 12 at 7:30 p.m. at the North Carolina History Center’s Cullman Performance Hall at Tryon Palace.  This concert will feature internationally-renowned musicians Robert McDonald, piano, and Ara Gregorian, violin, performing masterpieces by Beethoven, Strauss and more. This is the first concert of a three concert series that also includes performances on Dec. 1 and May 4.

The Four Seasons Chamber Music Festival brings world-class chamber musicians to eastern North Carolina and beyond for concerts, master classes, interactive community outreach, a children’s residency, Next Generation residencies, Next Gen on the Road tours and the Four Seasons Family Night. Highlights of past seasons include more than 97 public concerts, 254 master classes, two performances at Weill Recital Hall at Carnegie Hall and a six-concert tour of Israel.

Pianist McDonald tours extensively as a soloist and chamber musician throughout the United States, Europe, Asia and South America; has been a recital partner to Midori and Isaac Stern; and is a member of the piano faculty at The Juilliard School and the Curtis Institute of Music. Founder and artistic director of the Four Seasons Chamber Music Festival, Gregorian has appeared at festivals throughout the United States, Finland, Holland, Canada and Puerto Rico; has performed extensively as a member of chamber music groups such as the Daedalus Quartet, Concertante and the Arcadian Trio; and is a member of the violin faculty at East Carolina University. 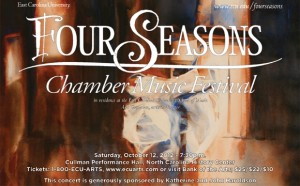 “It is exciting for Four Seasons to become a part of the New Bern community,” said Ara Gregorian, festival founder and artistic director. “We look forward to building upon our thirteen years in Greenville and to working with the New Bern community to make this inaugural season and future seasons in New Bern a great success.”

The Four Seasons Chamber Music Festival is in residence at East Carolina University.

For more information about the festival, repertoire, guest artists, or outreach go to www.ecu.edu/fourseasons, or call 252-328-6019.