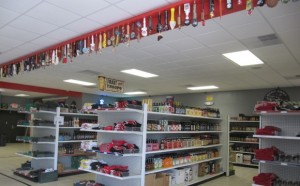 What we do: Beer Army’s mission is simple — to raise money for noteworthy charities and non-profits while developing a craft beer scene and community in Eastern North Carolina. We do this by promoting craft beer with our premiere beer festivals and our retail store, donating a portion of all proceeds. We uphold all breweries big and small but we emphasize supporting local and regional breweries.

To date and through the public support of Beer Army, we have helped the recession depressed communities of Eastern North Carolina by providing 1.4 million dollars of economic impact. Beer Army is a philanthropic organization and has donated over $70,000 to local charities during this same period.

Continuing with our giving-back mindset, we will establish the Beer Army Vigilant Guardian Foundation and donate a portion of all net proceeds from the beer sales of our brewery. The Beer Army Vigilant Guardian Foundation would utilize these funds and provide micro loans and grants to other aspiring entrepreneurs looking to establish businesses in our communities. Finally, once the brewery reaches profitability, we will donate every dollar that was given to us back to charity in the donor’s name! Essentially we are asking them to donate money to charity via Beer Army and allow us the opportunity to use it for just a short while.

What we need: We are asking for help and support by visiting the brewery website at www.BeerArmyCombatBrewery.com or www.indiegogo.com/BeerArmy. At those websites, you can donate and vote on where you would like to see the brewery built. Based on their funding level, donors will get some great stuff in exchange like merchandise, festival tickets and will forever be immortalized on the “Wall of Honor” as a Founding Member of the Beer Army Combat Brewery.

Together, we will be creating ten jobs at the Beer Army Combat Brewery. That may not sound like a lot, but it is ten more jobs in an area that has double digit unemployment. These jobs will be established from our fans’ modest giving. Within three years, Beer Army Combat Brewery will reach maturity and will be employing between 18 and 24 personnel thanks to our supporters!

It is under the greatest adversity that there exists the enormous potential for doing good both for oneself and others. This is a monster challenge no doubt; we are looking adversity in the eye and challenging it to a fight because we have a secret weapon — YOU!

Background: Five years ago when we started Beer Army, our desire was to build a brewery. The beer climate at that time was heavily focused on main-stream beers and we weren’t sure the Crystal Coast Triangle area (New Bern, Morehead City, Jacksonville) could support a micro brewery. Preparation of the area was needed, and we have spent the last three years growing the craft beer community through our beer festivals and servicing that demand with the addition of the Beer Army Outpost in New Bern, North Carolina.

While our festivals and store are focused on giving back to our communities, they have created a demand for craft beer. Beer Army is now prepared to continue this ENC beer revolution by building the first brewery in the Crystal Coast Triangle and have it operational by 30 June 2013. Somewhere in this area we will be building the Beer Army Combat Brewery, a local brewery for people in the area to call their own.

About the General: Dustin Canestorp is the Founder and General of the Beer Army. He is a beer judge, home brewer and avid beer enthusiast. He is also an active duty service member in the U.S. Marine Corps.