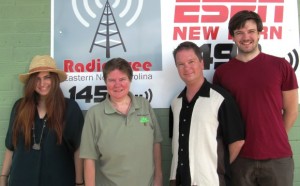 Laura Johnson and I had the pleasure of meeting three of the actors who’ve traveled from New York City and Lenox, Massachusetts, to act in the romantic comedy “Much Ado About Nothing”!

Check out Laura’s audio interview here or listen to it on Radio Free ENC’s WNOS 105.9FM and 1450AM:

Sydney Angel plays Hero. She’s started performing by singing when she was 12 and began her acting career when she was in high school. Sydney is originally from San Francisco, CA, and lives in New York City.

Michael Deely plays a drunkard, Borachio. He’s been acting since he was in high school and became serious about it in college. Michael is from Chicago and also lives in the Big Apple.

Find out what their favorite lines are by listening to the interview!

Scott Renzoni said, “People are really going to love this play because it’s like a sitcom; with its romantic entanglements and plot”.

“Much Ado About Nothing” is a romantic comedy presented by the Carolinian Shakespeare Festival. The special Preview Performance will be held on Thursday, August 2nd at the North Carolina History Center at Tryon Palace. Opening night is Friday, August 3rd and runs through August 19th. This is the festival’s 14th season in New Bern!

Mary McGinley is the Director and the Arendell Parrott Academy is the production’s sponsor.

“Performances will be held on Thursdays at 7:00pm, Fridays and Saturdays at 8:00pm and Sundays at 2:00pm. Sunday matinees will be preceded by a Prologue, an informal audience discussion with the director at 1:30pm. There will be a special Preview Performance on Thursday, August 2nd at 7 pm with discounted tickets at $12 per seat.

Ticket prices are: $28 Adults, $22 Seniors, $20 Tryon Palace Council of Friends members, $14 Students and Active Duty Military. There will be a special discount price of $12 for all seats on the night of the Preview, August 2nd.  The Carolinian Shakespeare Festival will also be presenting two free concert readings of “Henry IV Part 2,” one at Old Theatre in Oriental on August 8th at 7:00pm and one at Tryon Palace on August 11 at 2:00pm.” – information provided by Anna Smith, Carolinian Shakespeare Festival.

Find out more information by visiting the Festival’s website: www.csfest.net.

Tickets for “Much Ado About Nothing” are available for purchase by phone through Tryon Palace: 252-639-3524 or toll-free at 800-767-1560 , Monday through Friday from 9:00am – 5:00pm; and at the North Carolina History Center Ticket Desk at Tryon Palace during open hours.  For more information, visit the Carolinian Shakespeare Festival’s website at www.csfest.net or www.tryonpalace.org.

Learn more about “Much Ado About Nothing” by reading this previous article on New Bern Now.

Special thanks to Michael, Scott, and Sydney! We wish you the best during the upcoming performances and look forward to seeing the live performance!

Tell us what you think by commenting below or sending us an email. Visit New Bern Now’s Facebook page to keep up with the latest happenings!