Skip to content
Nikki Talley and her husband, Jason Sharp, are excited to visit New Bern on July 28th, where she will be performing at the Broad Street Social Club!

Growing up surrounded by music, she’s been singing all of her life. Her Mother was a singer songwriter and played the banjo and guitar. During Nikki’s travels to Key West, she was inspired by street musicians. She’s sung everything from punk rock to three part harmony and finally “embraced her musical roots of edgy folk, mountain country, and old time music”. She hit the road with her musical partner and husband, Jason Sharp. 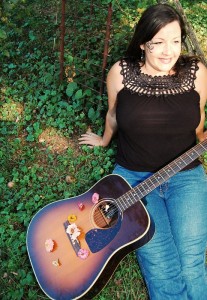 When I learned about Nikki coming to New Bern, I checked out her video (above) to hear her sing. What a wonderful voice! I adore Bruce Springsteen and have never heard a female sing his songs. She did an incredible rendition of “I’m on Fire” and I look forward to seeing her perform in person!

Check out her BIO (provided by Nikki Talley):

Hardworking, energetic, mountain girl with a big voice…these could all describe Nikki Talley. Raised in Ruffin, North Carolina and hailing from Asheville, it’s only fitting that her music is as eclectic as the state that boasts the mountains and the sea. Trying to pin down Nikki’s style, critics and reviewers alike have compared her to Patty Loveless and Gillian Welch, but to leave the comparisons there would be doing a disservice to her fiery stage performance, hauntingly seductive and raw gritty lyrics, lifted by a voice that harkens back to the Appalachian roots from which she was born, and shores up on the edges of contemporary country, folk, and old time that has her audiences stomping and clapping for more.

Nikki’s energy is as big as her voice and has taken her over all over the Southeast, playing such prestigious festivals as Magnolia Fest in Live Oak, FL to the Shakori Hills Festival in Pittsboro, NC. She’s had the pleasure of opening for such national acts as Edwin McCain and Susan Tedeschi.

Nikki’s latest release Beautiful Charmer has definitely upped the ante production-wise and has a decidedly more country feel.For this project she had a lot of help from a number of collaborators including Grammy-winning alt-country icon Jim Lauderdale. It garnered the #7 spot in WNCW’s top 20 regional releases of 2010 and #23 in top 100 releases.

Learn more about Nikki Talley by visiting her website!

Join in the fun and watch Nikki perform on July 28th at 9pm, Broad Street Social Club, 411 Broad St., New Bern, NC! I hope to see you there!

Tell us what you think by commenting below or sending us an email. Don’t forget to visit New Bern Now’s Facebook page.