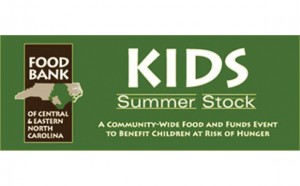 Summer is historically a time when food drive donations tend to slow down for all food banks across the country.   People are out of their normal pattern.  They are on vacation. Hunger is not foremost on their minds.

During the summertime, community-based non-profit agencies, such as food pantries and children’s programs, supported by the Food Bank report an increase in the number of parents and grandparents seeking food assistance for their families.

Kids Summer Stock is an awareness campaign held during June and July to collect food and funds to help fill the shelves of Food Bank of Central & Eastern North Carolina at New Bern warehouse at a time when food drive donations tend to slow down and school cafeterias are closed to thousands of children on the free and reduced meal program. They are still in need of daily meals.

This awareness-building food and funds campaign has been extremely successful and has provided 6 million meals to children and their families during the past four summers.

The goal for the two month long 2012 Kids Summer Stock Campaign is to provide 2 million meals.

In the 5 counties (Carteret, Craven, Jones, Pamlico and Onslow) served by the Food Bank of Central & Eastern North Carolina at New Bern, there are nearly 50,000 individuals at risk of hunger.

Nearly a third of those who are living at or below the poverty line in our service area are children (17,829 or 35%).

But even more children are on the free and reduced meal program and they lose access to these meals when the school cafeteria closes for summer break.

[Note: In the ten counties served by our New Bern and Greenville branches, more          than 59,000 children are on the free and reduced cost meal program.]

Involvement in Kids Summer Stock will allow the Food Bank of Central & Eastern North Carolina to keep shelves stocked so that these children and their families will continue to access meals through our pantries.

Kids Summer Stock 2009 provided 1.75 million meals to those families and children suffering from hunger in our communities