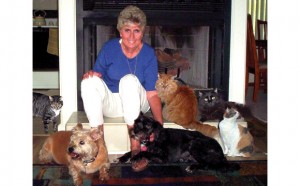 Laura Johnson and I sat down with Bonnie Compton, President of Pals for Paws to find out more about her non-profit organization.

Listen to Laura’s interview with Bonnie:

Pals for Paws has two missions. One is subsidizing the costs of spaying and neutering pets. The other is the New Leash on Life program at Craven Correctional Institution that will be discussed in a future interview.

I think most people know there is an endemic of stray cats and dogs across the Country. Pals for Paws is trying to reduce the number, one animal at a time. This is a very serious situation. Since adopting this program in 2010, they’ve spayed/neutered 670 cats and 344 dogs. Can you imagine if these animals were given the chance to mate?

They’ve teamed up with the Animal Care Center on Hwy 17 to help subsidize the costs of having animals fixed.

Pals for Paws spay and neuter program is based on the honor system. If people can afford to pay for the procedure(s), they are highly encouraged to do so because there are many people who can’t afford it.

With the donations they receive, Pals for Paws subsidizes $25 per cat, $50 per dog, and $14 per rabies vaccine to help prevent the growing number of feral animals.

If you have a pregnant animal, she can be taken care of for an additional fee.

Support this important cause to make a difference in the enormous stray animal population in our community.

On a personal note, I’ve had to take my dog to the veterinarian for a rabies booster vaccine after he was bit by a feral kitten. I was also bitten and it was heartbroken and was mortified by the fact that the baby was placed in quarantine and would probably be put to sleep after the timeframe because it was feral, aggressive, therefore, non-adoptable.

Pals for Paws works with other animal agencies in the area, as they don’t physically trap or release animals.

For more information, please visit www.palsforpaws.org and fill out a spay/neuter application. You can also read the frequently asked questions on their website or send them an email.

Special thanks to Bonnie Compton and the volunteers at Pals for Paws all you do.

Tell us what you think by commenting below or sending an email. Don’t forget to visit New Bern Now’s Facebook page.