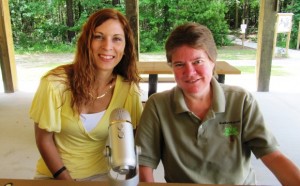 Listen to “Radio Laura” Johnson’s interview with up and coming Author Tressa Messenger:

Nancy Hudson Hall, an acquaintance of New Bern Now, contacted us to tell us about her longtime friend and local Author, Tressa Messenger’s official book release party and signing.

So Laura Johnson and I met Nancy and Tressa at the Latham Whitehurst Nature Park on Broad Creek Road for an impromptu interview to find out more about this young and upcoming writer.

We learned that Tressa Messenger struggled through school with dyslexia, a prominent and commonly undiagnosed learning disability. Tressa is one of over two million students struggling with dyslexia – reported by the NY Times.

She grew up with the insecurity of thinking she was inadequate, leading to low self esteem and depression. Like other students suffering with dyslexia, she dropped out of school at a young age. 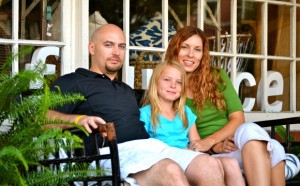 Years later, Tressa was diagnosed with dyslexia. Instead of giving up on her dreams, she was determined to succeed! She earned her GED, graduated from college while working full-time and raising her daughter, Brennan, as a single parent.

It’s so unfortunate that such a beautiful and intelligent young woman would be so insecure! Tressa wants her story to reach both children growing up with and adults dealing with dyslexia. She wants them to know that they can defeat dyslexia and accomplish their dreams!

Before writing this article, I found it necessary to read part of Tressa Messenger’s book, Protector. It was engaging and I’m ready to read more!

Here’s a summary of the Protector provided by her friend, Nancy Hudson Hall, “Protector is a story about a young woman named Anna-Marie who grew up in Pamlico County and has spent most of her life in love with the boy across the creek. When Anna-Marie’s boyfriend, Dylan, dies under mysterious circumstances it drives her into a deep depression. She desperately clings to his memories for solace. After reports come out of a second mysterious death, Anna-Marie climbs her way out of despair as she throws herself in search of the assailant, who is callously tearing so many lives apart. During Anna-Marie’s search, she has a chance encounter with a mysterious man who flips her world upside down once again. Alessandro appears just as normal as the next guy, but he is far from it.”

She will be signing her first two books Protector and Protect Me. Enjoy good food, good music, and participate in a raffle to win prizes! Some of the prizes include the first couple chapters of the next book in the series which has not been published, a sneak peek of her book Too Close To Home which has not yet been published, a free photo shoot and 2 tickets to Zombie Prom courtesy of Stallion Entertainment to just name a few things. During this event only, instead of Paying $12.99 per book, you can buy both books for $20.

Purchase Tressa’s books at Crockertown in Oriental, Mitchell Hardware in New Bern, or on Amazon.com

Special thanks to Tressa Messenger for sharing your story with us. Thanks to Nancy Hudson Hall for telling us about Tressa. Great job on the interview, Laura Johnson!

Tressa was also featured in the Pamlico Newspaper by Nancy Hudson Hall.

Feel free to comment below or send us an email. Don’t forget to visit New Bern Now’s Facebook Page.