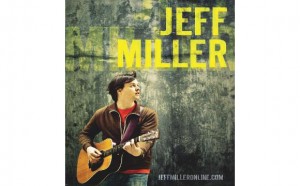 Jeff Miller lives in Nashville, TN with his wife, Debbie and new baby boy.  A degree from Boston’s Berklee College of Music, a move back home to Pittsburgh, a move to Nashville, and 3 solo albums (and an EP) later, Jeff Miller is hot on the music chart. In fact, he plays over 150 shows a year, touring the east coast and the mid-west. His music has received airplay at over 175 stations, in the U.S. and abroad. At his live shows, he uses a device to record and loop guitar and vocal parts, creating more sound than many bands do. Using his voice, guitar, hands and feet, he is able to act as each member of a regular band – a singer, guitarist, bassist, even a drummer. To hear samples of Jeff’s music visit www.jeffmilleronline.com. You really should see/hear it for yourself. Jeff’s reviews speak for themselves:

“I don’t know how he does what he’s doing, but it’s amazing.”

“His music is timeless. Like other notable purveyors of pop, such as Todd Rundgren, Badfinger or Ben Folds, Miller isn’t afraid to embrace and wield melody as a musical weapon. But instead of doing damage, the songs on “Seesaw” are infectious delights, from the Abbey Road-fueled ‘Scars’ to the sunny-side sound of ‘Can’t Take it With You’ and its contrasting lyrical sentiment. Miller even shows a new, heavier side in ‘The World is Out to Get You,’ arguably the album’s best track.”

“Miller comes to Nashville by way of Pittsburgh. He comes packing three excellent albums. Each has Jeff’s own distinctive brand of acoustic pop/rock – with great hooks and songwriting sensibilities. Jeff has been slowly but surely gaining in National popularity – he recently performed on Fox in the Morning, Lightning 100 featured his song ‘Scars’ on the Local Lightning Spotlight, and he’s received airplay at over 175 stations in the US and abroad. Jeff is an independent artist at the moment, though I suspect he will be picked up soon. He’s released three great albums, he’s touring, has a large fan base, is getting TV and copious amounts of radio play on his own, and is working on going into the European market. Come to think of it, he may not need or want a label. But that leaves good management and tour representation wide open.”