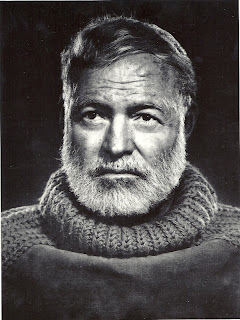 HEMINGWAY, His Way a play about the life and loves of Ernest Hemingway will be produced by Paul & Patsy White at New Bern’s Athens Theatre 414 Pollock St. on Friday and Saturday December 9 & 10 at 8 PM and Sunday December 11 at 3 PM.

HEMINGWAY, His Way is a Broadway-style, one-man play with a complete set, authentic props and costumes. It was conceived and written by Paul White after several years of research into biographies, published interviews and Hemingway’s own letters and by-line articles. Much of the play consists of direct quotes from Mr. Hemingway. Mr. White will portray the title role and has appeared in one-man plays about Clarence Darrow, Senator Sam Ervin and Spencer Tracy. Paul was a lead actor in the “Rocking Chair” spots in the ’08 & ’10 US Senate races in North Carolina.

This tribute to Ernest Hemingway reveals a vulnerable, deeply troubled man, whose fight with his own demons produced some of the greatest fiction of the 20th century. The play, intended for mature audiences due to language, is set on July 2, 1961 (50 years ago), the last day of his life. Told in flashback, HEMINGWAY, His Way, presents the triumphs and tragedies of this fascinating life in humor and pathos. Over seventy Hemingway photos will be projected during scenes. From the battlefields of WWI, to Paris in the roaring 20’s, the bullfights and civil war in Spain, Sloppy Joe’s in Key West, D-Day in France, fishing for marlin off Cuba or safaris in Africa, Hemingway was there. He talks about his four wives and several other ladies in his life and his novels “A Farewell to Arms”, “For Whom the Bell Tolls”, “The Sun Also Rises”, and “The Old Man and the Sea”, all produced as major movies. “The Old Man and the Sea” won Pulitzer and Nobel Prizes.

East Carolina Dermatology and Skin Surgery, Coastal Carolina Health Care, New Bern Tours and Convention Services, Branch’s Furniture and Home Inventory Specialists are sponsors of this production. A Hemingway look-a-like contest will be held Thursday December 8 at 5:00 PM at the theatre with live coverage on WCTI-TV12. The winner will be awarded two tickets to the New Bern performance of their choice. Substantial proceeds from this production will be donated to American Cancer Society in memory of Paul White III. Tickets are $22 in advance and are available at New Bern Civic Theatre, 412 Pollock St., Tuesday-Friday 10 AM-4 PM or by calling 252-633-0567. If available, tickets will be $25 at the door. For more information see www.newberncivictheatre.org.

Submitted by: Paul and Patsy White