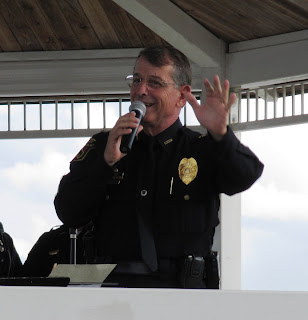 In celebration of a life-long career in law enforcement, the police department and citizens of New Bern will honor Police Chief Frank Palombo during a public retirement ceremony June 1, 2011.

For more than 34 years, Palombo has dedicated his life to public service. He came to New Bern in July 1997, after 20 years with the Clearwater Florida Police Department.

More than a decade later, Palombo has led the NBPD to three national CALEA accreditations, served on numerous state-wide commissions, and was instrumental in bringing North Carolina LinX (Law Enforcement Information Exchange) to the region. He has become a permanent fixture among his fellow New Bern officers, employees and citizens.

“There’s no doubt that the city will lose one of its biggest champions with his departure,” said Kevin Roberts, New Bern Chamber of Commerce President. “The only thing that rivals what he has done for the police department is what he’s done for the city.”

Palombo hopes his retirement is not just a recognition of his service to New Bern, but is a celebration of the relationship between the city’s citizens and police officers—who together—have made New Bern a better, safer and stronger community over the past 14 years.

“The example he has set as a leader, as a friend and as an advocate for improving the lives of New Bern citizens has inspired so many of us to push ourselves to the next level,” Roberts said.

The public is invited to share in Chief Palombo’s retirement beginning with a social hour at 4 p.m. and ceremony at 5 p.m. at the Riverfront Convention Center in downtown New Bern. For more information, please contact Marianne Poe at (252) 672-4190.

Submitted by: Beth Stevenson on behalf of Chief Palombo