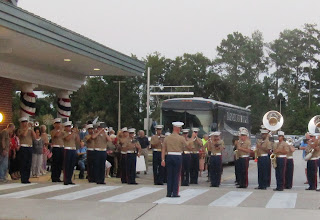 Thinking that I showed up early (6:45pm) for the special “Homecoming of WWII Veterans” from their Honor Flight to Washington, DC, I was shocked to see the Coastal Carolina Regional Airport parking lots were filled and cars lined the nearby streets. 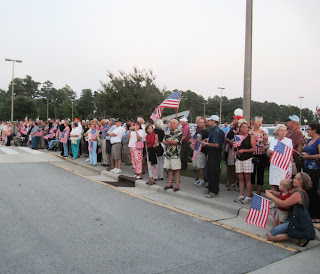 Parking a ¼ mile away, I was still in awe of the amount of people who waited anxiously to greet and thank those who served our Country, sacrificed their lives, and lost loved ones during World War II.

People from New Bern and numerous Eastern North Carolina communities were lined up inside and outside the Airport, prepared with flags, and ready to give these veterans and volunteers a hearty welcome home! The Marine Corps Band did an outstanding job by playing patriotic music to keep the outside crowd entertained. 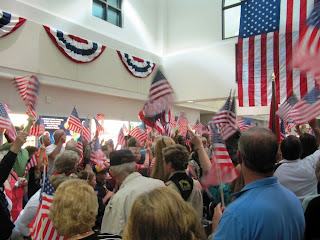 When the World War II Veterans arrived, they came one by one on the “Red Carpet”. They were saluted by the Knights of Columbus, welcomed by fellow Veterans,Boy and Girl Scouts, Young Marines, Navy Junior ROTC, United States Marine Corps escorts and the USMC Band, and I have to mention Mrs. North Carolina for her sincere welcome to each and every one of these veterans! 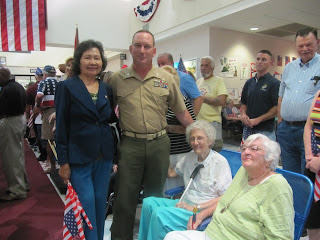 Top FIVE Homecoming Perspectives:
1. Standing next to WWII Veterans Wives (for at least an hour) as they waited for their husbands. As soon as they appeared, they embraced each other and became one unit again! This may have been the first time they were apart for that length of time in years and it looked like they were in love for the first time in their lives!

2. Witnessing a tear fall from Veteran’s cheek – he/she was elated and in disbelief of the warm welcome they received from our community (this happened more than once).

3. When Mrs. North Carolina greeted each veteran with a warm handshake, hug, or even a kiss on the cheek. It was cute to see a strong man blush!

4. Seeing the only woman WWII Veteran. I wish I had a chance to find out who she was. I heard someone say that she was a Pilot, but my guess was she’s a Navy or Army Nurse – either way she’s a Lieutenant Commander or Major (If anyone knows who she is, I would be proud to meet her in person).
5. Listening to the crowd sing “God Bless America” and another song, I was too overwhelmed to remember the name. No matter what song it was, the crowd went wild when the Veterans and their Escorts came down the “Red Carpet”!
Thank you, World War II Veterans, Escorts, Honor Flight of Southeastern North Carolina, Coastal Carolina Regional Airport, Volunteers, Spouses, Veteran Volunteers, and everyone who showed up to welcome our Veterans Home! What a GRAND TIME and fantastic way for our community to come together to give our support!
More Homecoming Photos are posted on New Bern Now’s “Photo Gallery”: https://newbernnow.com/index_files/photogallery.html.