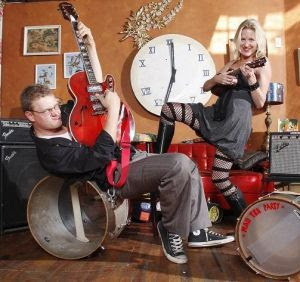 The band’s dynamic show has been catching people’s attention across the country. Metro Santa Cruz described it this way, “More a spectacle than a traditional two-person band, Mad Tea Party consists of vocalist and ukulele strummer Ami Worthen and guitarist, fiddler and drummer Jason Krekel. As Worthen reels out charming and quirky songs with an arch sense of humor, Krekel does double- and triple-duty, creating the illusion of a much bigger band with only two arms and two legs. It’s a sight to behold…but Mad Tea Party’s unique sound is just as worthy of note. A bubbly amalgam of juke-joint blues, pop, tiki exotica and rockabilly, the band has honed an approach that is unique and affecting without being too precious.”

Broad Street Music at the Journey Cafe, eastern Carolina’s best listening room, hosts nationally touring artists Friday and Saturday nights from 9:00 p.m. to 11:00 p.m. Providing quality entertainment for all ages in an alcohol-free environment allows audiences at Broad Street Music to fully enjoy an intimate atmosphere and an up close connection with the artist.

For more information send them an email.