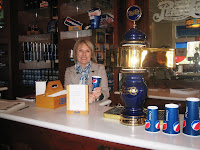 Entering the Pepsi Store, I received a cheerful greeting from the “Pepsi Girl” (Jo Ann Riley) and the visitors sitting at the soda fountain. They were from out of town and enjoying the experience and video of the history of Pepsi Cola.

In case you didn’t know, Caleb Bradham was an Apothecary, known as a Pharmacist today. He wanted to become a Physician but had to leave medical school to attend to family matters. While experiencing with different mediums, he concocted a tasty elixir called “Brad’s Drink” in 1989. He called this refreshing drink “Pepsi Cola”. This new drink spread like wildfire and before he knew it, franchises were opening around the Country.

I could ramble on and on about the history of Pepsi Cola, but you’d probably enjoy it more by visiting the The Birthplace of Pepsi Cola located at 256 Middle St (corner of Pollock St), while drinking a Pepsi served out of their fountain and watching this history lesson revealed on video!

If you’ve never been to the “Birthplace of Pepsi Cola”, you would be pleasantly surprised by the nifty gifts and souvenirs. From t-shirts, hats, magnets, ornaments, jewelry, cozies, and numerous Pepsi and Mountain Dew items for the Pepsi Cola and Mountain Dew lovers in your life. 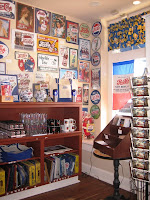 Downtown New Bern was bustling with both locals and visitors – the beautiful weather was a plus! What a fantastic day to see people out and about shopping and smiling!

Thank you, Jo Ann Riley and the visitors who I enjoyed talking with. What a terrific experience! I’ll definitely take my folks here on their next trip to New Bern!