Happy Hanukkah to our Jewish friends!

Yesterday was a happy day for me as I celebrated Hanukkah with Temple B’nai Sholem’s congregation on December 5, 2021, in New Bern, NC. This was their first Hanukkah gathering since the pandemic came to town. Hanukkah began in the evening of November 28 and ends tonight, December 6.

The celebration was held next door to the Temple, in First Presbyterian Church’s Session House to accommodate for the number of attendees.

I’ve read a lot about Hanukkah, but nothing compares to experiencing it firsthand. The afternoon started out with storytelling that described the Festival of Lights, Hanukkah traditions, and the importance of remembering them.

Paul Andersen read the story Hanukkah Means Hope about the miracle of lighting up the dark in the Holocaust. It was compelling as the family in the book were able to find hope in the midst of being deported to extermination camps. Highlighting the menorah’s history, Mr. Andersen read, “Every time a Jew lights a candle as we do on Hanukkah, we chase away some of the evil and darkness in the world.”

Paul’s wife Lilith Andersen narrated the story of Latke Town. It was a story about a little girl making pancakes with a miracle frying pan. Mrs. Anderson noted, “It made enough latkes for all eight days of Hanukkah just like the small flask of oil that lasted eight days in the Holy Temple.”

Mitch Lewis and Joanne Friedman put together a medley of songs. They led us in a joyful, toe tapping singalong.

We were served latkes and jelly donuts and Elga Joffee and Bernice Lamey lit the menorahs.

The afternoon wrapped up with fellowship and fun games of bingo.

We received a bag of trinkets to take with us. Inside, was a dreidel. It’s used to play a game, but it has a deeper meaning. The letters on the dreidle – Nun, Gimel, Hei, and Shin are an acronym for the phrase, “great miracle happened there”.

I asked Maxine Wiesman about the Hannukah menorah, and she explained, “It had eight candles representing the eight nights of Hannukah. And one additional candle that is used to light the other candles. It’s not the same seven branch menorah that is also found in Jewish temples and synagogues.”

Everything connected when she shared the history, “A tyrant king from Damascus had ruled over the Jews and forced them to worship Greek gods. Jewish rebels fought for their freedom for three years and, victorious, reclaimed the holy temple in Jerusalem. Now to rededicate the temple, they needed oil to light the menorah but they could only find enough to keep the flames burning for one night. And here’s the miracle: The oil lasted for eight days. In that time, they were able to make oil and keep the eternal flame lit.” 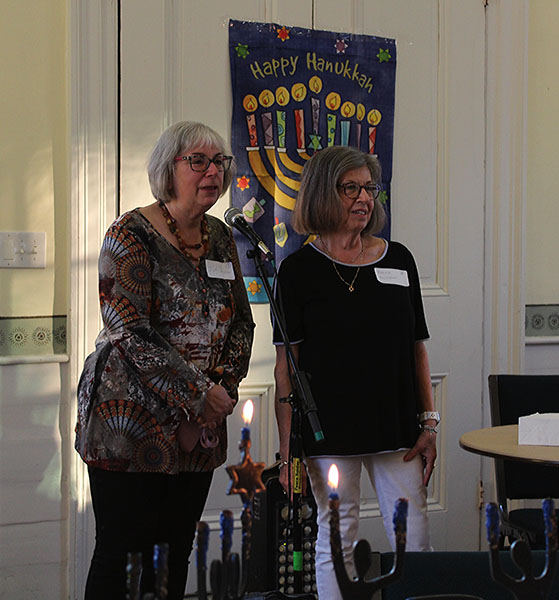 Thank you, Jody Sherman and Maxine Wiesman for organizing this special event and for welcoming me as a guest. Everyone was very friendly and accommodating. I had a wonderful time!