At around two in the afternoon at Danderyd Municipality Hospital in Stockholm, Sweden, I was waiting anxiously for many hours for the arrival of my son. Finally, the midwife said to me, “Here he comes, get ready.” The next thing I knew I was handed a pair of scissors and ordered (not asked) to cut the umbilical cord. No, I didn’t faint, but the experience was overwhelming.

The date, July 13, 1985, remains planted in my brain for two reasons: 1) Frederick’s birth of course, and 2) The world-wide Bob Geldorf TV special, “Live Aid to Africa.” The concert showcased among others, Queen featuring the famous Bohemian Rhapsody. When I turned on the TV at home, The Cars were doing Drive during which the Swedish TV station inter-laced dramatic scenes of Ethiopian mothers with their sick and dying children. Knowing my son would never experience such calamity, it brought tears of empathy and sorrow to my eyes. The TV concert took place simultaneously in London and Philadelphia raising millions for relief and spawned similar musical events for equally worthwhile causes.

Almost 36 years later, little Freddy Scott, now 6′ 2” and full of musical experiences, shows up in New Bern to play classic blues last Monday with Big Jim Kohler’s band at the Brown Pelican. Where he went after Stockholm and how he got to be a rising artist out in “sin city” as Gram Parson called it, is the gist of my interview with him.

After graduating with a BA in sound recording and music from American University in Washington, DC, Freddy headed straight for LA. My first question was obvious:

What took you to LA?

“I moved to LA because I wanted to be in the entertainment business. LA is the hub for everything: movies, TV music, etc. I fell in love with the town pretty quickly. It’s a place where people in the arts end up even if you start in New York. I knew this was the place I had to be.”

What were your first jobs out there?

“First of all, I was an intern at EMI, the company that lost the Beatles. I worked there for three months and hated it because I was watching people only a few years older than me coming into the studio and making recordings. I asked around to see how that happens and they said, ‘You work your way up and in ten years you can be like them, maybe.’ After that I spent a year picking up gigs and odd jobs recording bands. To earn extra cash, I played guitar at a church on Sunday mornings. Then I teamed up with Bill Luckinbill, Lucille Ball’s grandson, and played cover songs at parties, dinner clubs, and gigs to get by. After a while, I started playing at many of the clubs on Sunset Strip like The Roxy, Whiskey-a-Go-Go, Troubadour and others. One memorable night, I was on stage with John Legend at The Mint in a show that I directed and produced to perform a number of songs from a TV show called “Sherman’s Showcase.” Another time I worked with Dee Snyder from Twisted Sister, the former lead singer in the rock group. I helped write songs for him, played lead guitar on stage as well as collaborating on a musical he was producing.

You worked for the Irish whiskey company Jameson as music writer for their new directors’ short film series.

“It was produced by Trigger Street Films, and was called “Jameson First Shot.” It was one of the bigger jobs that I got back then. It was a competition that looked for new international film directors to make short films sponsored by Jameson. The company literally poured through thousands of applications to award a substantial grant to the winners to make a film with leading Hollywood actors. Kevin Spacey was the overall producer and acted in one of the films. He invited other well-known actors to join so people like Uma Thurman, Maggie Gyllenhall, Adrien Brody, and Dominick West acted in the films. I was on board for three years writing the musical scores for all the films. It was a pivotal point in my career because I learned so much working with these people and it gave me an opportunity to expand into composing music for films as well as generating a ton of momentum for my career goals.”

Why did Nerdist hire you to make videos?

“I had made a parody called A Trent Reznor Song for YouTube that went viral. It caught their attention and they asked me to work on videos. So, over three years we made 30 or more videos with one of them getting 33 million hits–a Bruno Mars Spider-Man parody called, That Spidey Life. My last big job with them was writing, acting, and directing a music video titled, A Star Wars is Born, which is a cross between the two films. That video has gotten 3.8 million views so far. It was a fun time working for Nerdist as I got to work as an actor, writer, musician and composer.

After that, you hooked up with RuPaul and Drag Race on VH-1.

“I got a call to write a musical about the Kardashians with my music partner Leland in 2016. It turned out to be an early segment of RuPaul’s show before they went to VH-1. I was able to combine a bunch of musical influences into one piece that had singing and comedy and was real fun to do. I thought it would be a one-time thing, but the show kept asking us back and as the show grew it went over to VH-1 Now, five years later, it’s won tons of Emmys, has gigantic ratings, and has a huge following all over the world. It’s been one of the great privileges of my career to be associated with the show.

You and Leland wrote a song for the UK version of Drag Race that went viral. Talk about that.

“We wrote a new song for the second season of the UK show that was preceded by a song in the first season called, “Break Up, Bye-Bye.” That song surprised us all by being a hit and going on the charts in the UK. It was number two on iTunes for a couple of weeks and this new one we wrote called “UK, Hon?” did even better than the first and went up the charts in England breaking all the old records and was the most downloaded song in England for an entire week. And, it has the distinction of being the highest charting drag song of all times. Even the mayor of London used lyrics from the song to announce that London is open. On the basis of the fame the song achieved, Leland and I were interviewed by a bunch of trade magazines like Variety, Billboard as well as the Washington-Post, The Guardian, Entertainment Weekly, and the Daily Mail. It all helps one’s career.

You’re now being considered for an Emmy for “Lucky.” Are you excited?

“It was a song we wrote for the season 13 finale. It was a throw-back to the Motown sound that our producers wanted. It got a lot of play and earned us a chance to be in the running for an Emmy which although I hope that works out, I’ll have to say just being on the show and working with all those fabulous people is a great reward in itself. So I’m hoping we can go forward with “Lucky” to win.” (Freddy told me that the competition for the Emmy includes Dolly Parton and Cher!)”

Finally, I want to ask you about your impressions of New Bern’s music scene. You’ve been coming here for the past 15 years since you were in college. We’ve gone together to many music venues around town, and you’ve sat in with some of the best. What do you think of our town’s music beat? 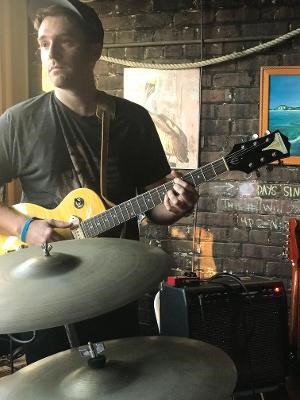 “I think the music scene here is very vibrant and fun, surprisingly fantastic and inclusive. I love how everyone knows each other and plays with each other. There are some very top tier musicians in this town and it’s great fun to hang out with them and to play with them. It’s a great honor to come here and play with them and be a part of it all. I should mention in particular, Wick Wickline, Patrick Edwards, Big Jim Kohler, and Ed Loveless as some of the great musicians I’ve jammed with. Always a pleasure being around those guys.”

Next month, Freddy is leaving his beloved Laurel Canyon digs for his new home in Santa Monica. He’s a bit sad to leave a place he’s lived for so long as Laurel Canyon has a history of its own that, since the 60s, has been home to countless rock stars past and present like Steve Tyler, Mamas and the Papas, Joni Mitchell, Frank Zappa, the Eagles, Jim Morrison and many more.

One of my fondest moments in New Bern, was when Freddy came a few years ago from LA to join a band I was forming called Hickory Wind–named after a Gram Parson’s song. I was doing a fund raiser for the Women’s Shelter and Freddy played lead guitar while Patrick Edwards did duty on the drums. Playing with my son on stage was truly a moving experience for us both. And guess what? I taught him all he knows on guitar! (Don’t I wish)