Good morning, New Bern Now readers. The gas is starting to flow again. Here is your In the Now for Monday, May 17, 2021.

Via a variety of reliable sources

Today, partly sunny, with a high near 79. Calm wind becoming northeast around 5 mph in the afternoon.

Tuesday, mostly sunny, with a high near 80. Northeast wind 3 to 7 mph.

Tuesday night, mostly clear, with a low around 57. East wind around 6 mph becoming calm in the evening.

Over the next several weeks, citizens and visitors to New Bern may notice the installation of 16 sign panels that explain and interpret significant historic events, people, and places that pertain to the African American heritage within the greater Craven Terrace/Dryborough neighborhood.

The development of these signs has been guided by a committee chaired by local historian Bernard George and sponsored by the Historic Dryborough Neighborhood Association, the New Bern Historical Society, the City of New Bern, and the North Carolina State Historic Preservation Office. More

Leonard spent the majority of his formative years in the suburbs of Washington D.C. where, as a teenager, he discovered his love of boxing. At the age of 20, he dominated opponents in the 1976 Olympics in Montreal and took home the gold medal in the sport. Though he had originally planned to retire following the Olympics and go to college, his father’s mounting medical bills and the birth of his son persuaded Leonard to pursue boxing professionally.

In February 1977, Leonard fought the first of forty professional bouts, defeating Luis “The Bull” Vega and claiming a $40,000 prize. He went on to claim world titles in five different weight classes.

Despite his retirement in 1991, Leonard returned to the sport at age 40 to fight Hector “Macho” Camacho. The match was an embarrassing loss for Leonard and proved to be his last. Nevertheless, he finished his career with a record of 36 wins, 3 losses and 1 draw. Twenty-five of his wins were knock-outs. 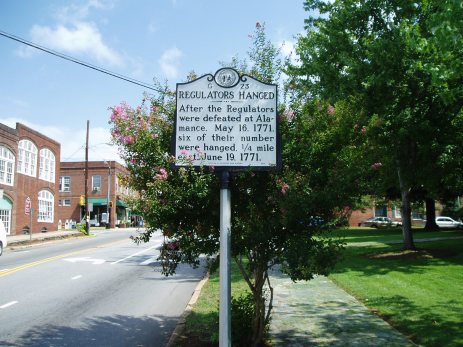 Few, a carpenter from Orange County, was part of the Regulator Movement, a colonial rebellion that predated the American Revolution. Fed up with corrupt officials, the Regulators took on royal Gov. William Tryon and his forces at the Battle of Alamance, where they were defeated. Few was taken prisoner after the battle, and Tryon had him executed without a trial.

Why exactly he was executed is a matter of debate. Tryon claimed Few was hanged to satisfy his troops’ thirst for Regulator blood after the battle, though others claim that corrupt Hillsborough official Edmund Fanning demanded Few’s death for his role in destroying Fanning’s house the previous year. Still others say Few was driven mad by Fanning’s transgressions with Few’s fiancé.

Whatever the reason, after the battle, Tryon’s forces destroyed the Few family farm. The family moved to Georgia, where James’ brother, William Few, Jr., became a member of the Continental Congress, a U.S. senator, and a judge.

After the Battle of Alamance, the Regulator movement largely dissipated, with most of its leaders either going into hiding or moving away.