“This is a big day for us,” said CarolinaEast CEO and President Ray Leggett.

He said affiliation with UNC Health will allow CarolinaEast to be a teaching hospital with “potential that is almost unlimited.”

Leggett said negotiations between the two entities has been in progress for a couple of years, following their affiliation with the SECU Comprehensive Cancer Center on the CarolinaEast campus. 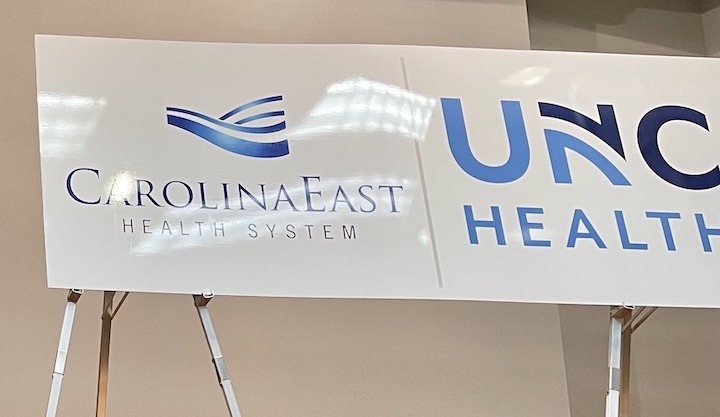 “Affiliating with UNC Health and working toward becoming a healthcare hub in this region is a tremendous opportunity for CarolinaEast and the people we serve,” said Ray Leggett, president and CEO of CarolinaEast Health System,” he said.

The affiliation between UNC Health and CarolinaEast “will enhance the quality of healthcare in the eastern part of the state while simultaneously growing specialty services in Craven County and beyond,” the newly affiliated systems said in a news release.

Allen Hardison, chairman of the CarolinaEast Health System Board of Directors, said the change will provide an opportunity to remain locally owned and operated while at the same time benefiting from affiliation with a “globally renowned health system. The affiliation with UNC Health will be mutually valuable to both organizations, but most importantly to the people that call Eastern North Carolina home.”

UNC Health and CarolinaEast already team up with the 80,000-square-foot SECU Comprehensive Cancer Center at CarolinaEast.

Affiliation between the two will:

“The prospect of expanding on health education capabilities offered at UNC and welcoming residents, fellows, and med students to our facilities will no doubt make us even better and stronger for our region,” he said.