Tonight, clear with a low around 51. Calm wind.

Tuesday, sunny with a high near 83. Calm wind becoming southwest 5 to 9 mph in the morning.

If you haven’t been vaccinated for COVID-19, signups are being taken for a clinic in Havelock in May.

Havelock COVID-19 vaccination clinics are available on May 15 by appointment only so register early.

The clinic, which is administering the Pfizer vaccine, is open from 9 a.m. to noon Saturday, May 15, at Cherry Point United Methodist Church 103 Methodist Drive in Havelock. The second dose will be administered on Saturday, June 5.

Before President Harry Truman’s 1948 executive order that ended segregation in the armed forces, blacks who served did so in segregated units, like the one at Montford Point. In the era of strict segregation, the interaction between white and black Marines during training was practically nonexistent.

The larger base, Camp Lejeune, had been established one year earlier as part of mobilization for World War II.  Shortly after that time, the Corps constructed barracks and support facilities including a chapel, mess hall, steam plant, and recreational area on the 1,600-acre peninsula that became Montford Point.

More than 19,000 black Marines served in World War II, all in units trained at Montford Point. Among the units organized there were the 51st and 52ndDefense Battalions, which were dispatched to the Pacific but saw no combat action, and 11 ammunition and 51 depot companies that did see action.

The facility became obsolete after Navy Secretary Francis Matthews ordered the end of racial division in the Navy and Marines in June 1949. 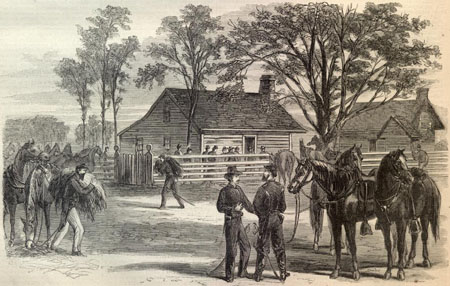 On April 26, 1865, the largest troop surrender of the Civil War took place on farm of James and Nancy Bennitt in what was then Orange County.

Ten days earlier two worn adversaries, Union Maj. Gen. William T. Sherman and Confederate Gen. Joseph E. Johnston, along with their escorts, rode out to meet and negotiate the terms for the surrender. By chance, the Bennitt farm was located halfway between the Union forces positioned in Raleigh and the Confederate forces encamped in and around Greensboro.

The two generals asked permission to use the farmhouse to conduct their meeting. The Bennitt family, already touched by the war with the loss of both of their sons and a son-in-law, retreated to the separate kitchen building to allow the generals to use  the house.

After several days of negotiations, which were complicated by the assassination of President Abraham Lincoln, Johnston surrendered his army. Johnston’s forces included all Confederate troops in North Carolina, South Carolina, Georgia and Florida, nearly 90,000 soldiers in all. The mustering out of the Confederate army took place in Greensboro in early May, where paroles were issued to the soldiers.