Two owners ago, it was a school bus. The next owner had dreams of gutting it and turning it into an RV.

But life has a way of changing people’s plans, and music school at Appalachian State in Boone beckoned.

Wilson White and Holly Millar put the word out on Facebook Marketplace: 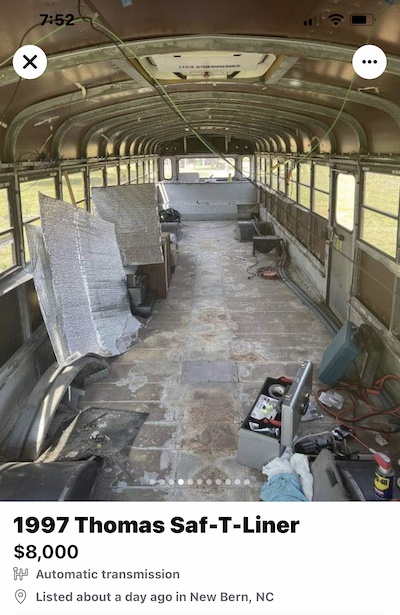 “Hello fellow Skoolie enthusiasts! I am excited and sad to say that me and my wife are selling our gutted bus. We had grand plans for it to be finished by summer of next year but life came along and now were are moving to a location that can not store our school bus.” 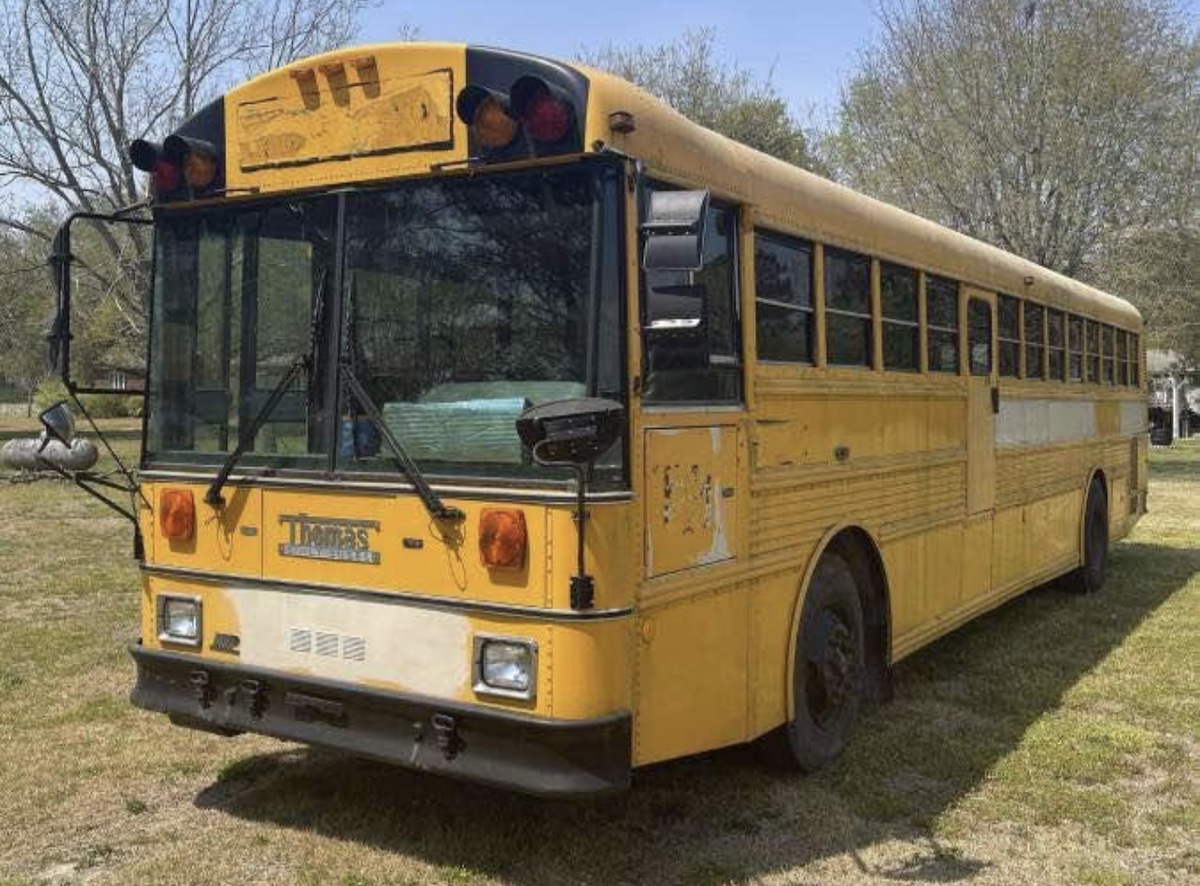 “Skoolie” of course refers to repurposed school buses. There is a thriving interest in retired school buses, which are built like tanks and are generally well maintained. Many get shipped off overseas. Farmers will saw off the sides and roof to make crop haulers. Do-it-yourselfers turn them into RVs and even liveaboards.

White and Millar were Team RV.

White studied music at Craven Community College. Holly is a salon owner and stylist and studied cosmetology at Craven CC.

But enough about us, let’s get to some specifics on the bus.

This ’97 Thomas is an absolute beauty. We really lucked out with the lack of rust and low mileage. And by lack of rust I mean there is NO rust underneath the bus and very minimal around the wheel wells. The engine runs great and the tires have at least 5 more years in them. Everything has been completely gutted except for the existing electrical and the water heater. All of the lights, alarms, and features are still up, and running smoothly. I have also replaced the batteries in the past month. The only blemish on this beauty is a crack on the passenger-side windshield. I have the title in hand and ready to be given to someone. Contact me by text or email!

There’s a story behind everything that’s for sale on Facebook Marketplace (at least for sale by individuals). So we reached out and asked.

Me and my wife have always dreamed of living a minimalistic, almost nomadic lifestyle. It just really appeals to us. Being able to pick up and go at the drop of a hat makes you feel a bit more like you’re off the grid hahah. And honestly, cost-wise, it’s much cheaper to convert a bus into a home than to buy a house. A lot more work, but it’s like choosing between what is right for us and what is easy for us. The right choice for us just so happened to be difficult. We aren’t giving up the dream, it’s not the time for the dream to manifest itself just yet.

So what’s the plan?

Well, I’m actually going to school this upcoming fall semester at App State, up in Boone NC. I was recently accepted to the Music Therapy program and I’ll be up there for 3 years to get my bachelors. My wife is a fantastic hairstylist who is running her own, holistic/wellness style studio salon called Authentic Roots. So she is planning on continuing with that career up in Boone. We’re torn between buying a camper when we move up there or renting for a year until we find something we like. Just depends on the opportunities that come out way.

How long did they work and dream about life with a repurposed school bus?

About 1 year. We gutted out the inside. Tore out all of the seats, flooring, ceiling and walls. A lot of blood sweat and tears so hopefully who ever buys it will treat it like the home it deserves to be!

No, not really. I’ve done some mechanical work on cars with my father, and I like to tinker with things. But this was a whole new ballgame.

Know anything about the history of the bus?

We bought it from an individual that was also looking to partially convert the bus and use it for vacations and the occasional trip. He had a family emergency that changed priorities for him, leading to us buying the bus!

He bought it from the school system. Once a bus hits a certain mileage it is put in a warehouse with other busses and they are auctioned off! We just so happened to find one that was in great condition. Rust is one of the biggest problems with older buses and ours has very minimal rust.

By the way, as of this writing, the bus was still listed for sale. Go here if you are interested in learning more.